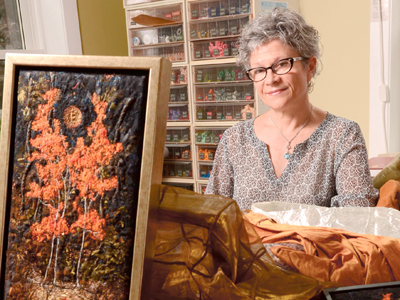 Sometimes our passions are bred into us and other times we're born into them ““ for textile artist Lorraine Roy, it was both.

Born and raised in Pain Court, a small agricultural town in Southwestern Ontario, Roy had textiles woven into her blood from day one. “Whenever I was doing anything with my hands, it was always with fabric,” remembers Roy. With a milliner grandmother handcrafting almost all of the family's clothes (including fur coats), the tricks and craftsmanship of embroidery, dress- making, rug making, knitting and crocheting were passed along through the generations.

The only member of her family to take the skill of textiles from hobby to full-time career, Roy joined the Canadian Embroiderer's Guild based in London, ON where professional teachers and artists were brought in from Great Britain and the United States for guidance. “They were a real inspiration, showing me that you could actually use textiles as an art form,” says Roy.

Working from her home studio, a building repurposed by the artist and her husband, Roy always begins with an idea. After the idea comes the thumbnail sketch, a perfect little doodle drawn with coloured pencils, mimicking the full- sized work it will soon become. Next she chooses her fabrics, each collected from flea markets, garage sales, friends and fabric stores, and lastly, Roy gets to work stitching and sewing her way through her next tour de force.

The finished product is breathtaking. Visually a painting, but physically something so much more, Roy's ability to maneuver fabrics into tex- tural works of art is truly awe-inspiring.

But when it comes to what to do with these skills, Roy draws her inspiration from an entirely different aspect of her childhood.

“I was kind of a solitary kid. I'd go by the river with my dog and we'd spend the whole day watching bugs and plants and just sort of being with [nature]… I think there are a lot of lessons to be learned by nature.” And learn is exactly what she did.

Enticed by her love of nature, Roy began tak- ing classes at the University of Guelph, resulting in a Bachelor of Science majoring in Ornamental Horticulture and specializing in Native Trees. After graduating and working in the field of horticul- ture, Roy realized that she could take her scientific knowledge of the plant world and combine it with the aesthetic world of artistic textiles to turn her passion into a full-time occupation.

“It's very hard to say when you go from someone who's interested in doing something to calling your- self an artist,” says Roy. But for her, June of 1986 will always remain memorable.

“I sold my first piece so that was a turning point for me.”

Influenced by both contemporary Canadian and abstract work, Roy blends an array of fabrics, colours and techniques resulting in textile master- pieces that would make even the most seasoned painter look twice.

Sometimes the ideas just come to her, but other times Roy sets out with a purpose, as was the case with her Native Trees collection. Wanting to work once more with the University of Guelph's Arboretum, Roy became aware of one of their cur- rent projects concerned with the seed preservation of 17 species of rare and endangered local trees. And so Native Trees was born.

A vivid portrayal of local trees in a myriad of seasons and settings, Roy is currently expanding the techniques used in Native Trees by blending abstract elements into her very realistic pieces. Most notably seen in the Spirit Trees collection, tree branches cradle the sun and roots fight for life among innumerable boulders in pieces such as Catching The Sun #3 and Tough Roots.

And if that wasn't enough, when Roy isn't busy creating new pieces she's teaching workshops on textile technique and how important the relation- ship between art and science truly is. Travelling cross-country to Edmonton and Vancouver Island in October to teach three different workshops, you can catch Roy closer to home in April 2013 when she will be at McMaster University for her discussion entitled The Embroidered Tree.

To some, a life filled with constant creations, commissions, workshops and discussions could become overwhelming, but when passion is your driving force it becomes a life of utter contentment.

“I don't really want to be doing anything other than what I'm already doing because I love it so much. There isn't a moment of the day when I'm not thinking of what my next project is going to be.”

Roy's work is featured in the 2012 Dundas Studio Tour, taking place on September 29 and 30.
For more info: lroytextileart.com