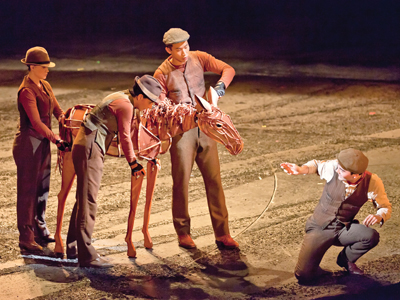 We often tell actors in a play to “break a leg!” in a left-handed way of saying “good luck!” But no one ever mentions the painful annoyance of a sprained ankle, which is what Mississauga native Rahnuma Panthaky is recovering from after dismounting from her “horse” and colliding with a puppeteer onstage.

Panthaky plays a number of roles in the all-Canadian Mirvish Production of War Horse at the Princess of Wales Theatre in Toronto. She acts as Paulette, a French mother of a young girl, she sings onstage in the English chorus scenes and in the first act performs as part of the three-person team who animates the foal Joey.

The roles require a great deal of energy, and that is the impression Panthaky presents ““ she is  vivacious and friendly, with flashing brown eyes and hands constantly in motion, despite a slight limp.

War Horse is an unusual and powerful play that tells the story of Albert Narracott, a young English boy whose father sells the beloved family horse to the English cavalry at the start of World War I. Albert joins the army as soon as he is able, and when sent to the trenches in France he spends his spare time searching for Joey, the horse he raised and trained.

The most unusual aspect of this play is the many life-size horse puppets used in all the scenes. In each case, two puppeteers operate the hind or the fore legs, and the third moves the head, mouth and ears. Audiences very shortly forget the presence of the human operators, and start to see only horses in action. The illusion is complete.

Because there is so much action in the show, and the puppeteers in the full-size horses carry an actor plus 130 pounds of “horse” on their shoulders, the cast has nick-named the production “Sore Horse,” Panthaky confides.

The seasoned actor grew up in Mississauga and chose Cawthra Park Secondary School's dance program after attending Briarwood Public School and graduating from The Valleys Senior Public School. She failed her dance audition, but re-applied for the drama program and got in.

“We grew up in the Valleys, and later the Heartland area. I used to hang around Square One when I was a teenager. My sister Pearl and I recently went shopping there again. It's huge now, and a little cheesey, but I like it. I like the Port Credit area, too. When I went to Cawthra we'd often go for lunch at the pier.

“I later went to Sheridan College and University of Toronto to learn to teach drama. In my second year, I got bitten by the acting bug.” After graduation, Panthaky set out on a whirlwind of professional development and acting projects.

She co-founded two theatre companies, has run theatre festivals, starred in a number of television series on the CBC, ABC, NBC and BBC, and most recently was the voice of Tim Horton's in Canada. During her career she has also acted with the likes of Jon Voigt and Louis Gossett Jr., Alfred Molina and Chris O'Donnell, Tony Shaloub and Vivica Fox.

The New York production of War Horse won six Tony Awards last year, and the Toronto version is produced to just as high a standard.  Panthaky says the thing she enjoys most about the show is “the people I work with.” The ensemble cast, she says, “consists of the nicest people in the acting community.”

Panthaky's next project will be a film called Pinweight about women's boxing in India. She boxes in her spare time, and says “there's something therapeutic when fist and glove hit the bag.” She also plans to eventually move to Los Angeles with her husband Michael to pursue more TV and film work.

“I'm gunning for a Golden Globe,” she says with a smile.

But for now, she's happy to ride a make-believe horse across the war-torn fields of France and to nurse her swollen ankle.

The show has been extended until September 30. But whenever it ends, Panthaky will have a full slate of new projects ready to go.

The critics are near unanimous in their praise, and when the curtain descends there's hardly a dry eye in the house. If you know someone who doesn't like plays, take him to see
War Horse.