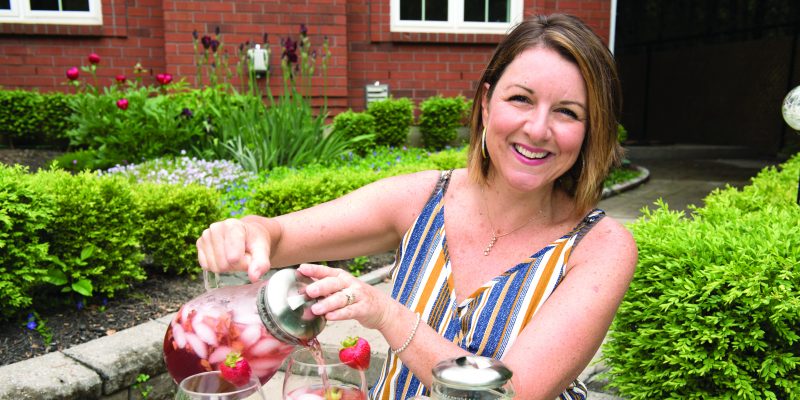 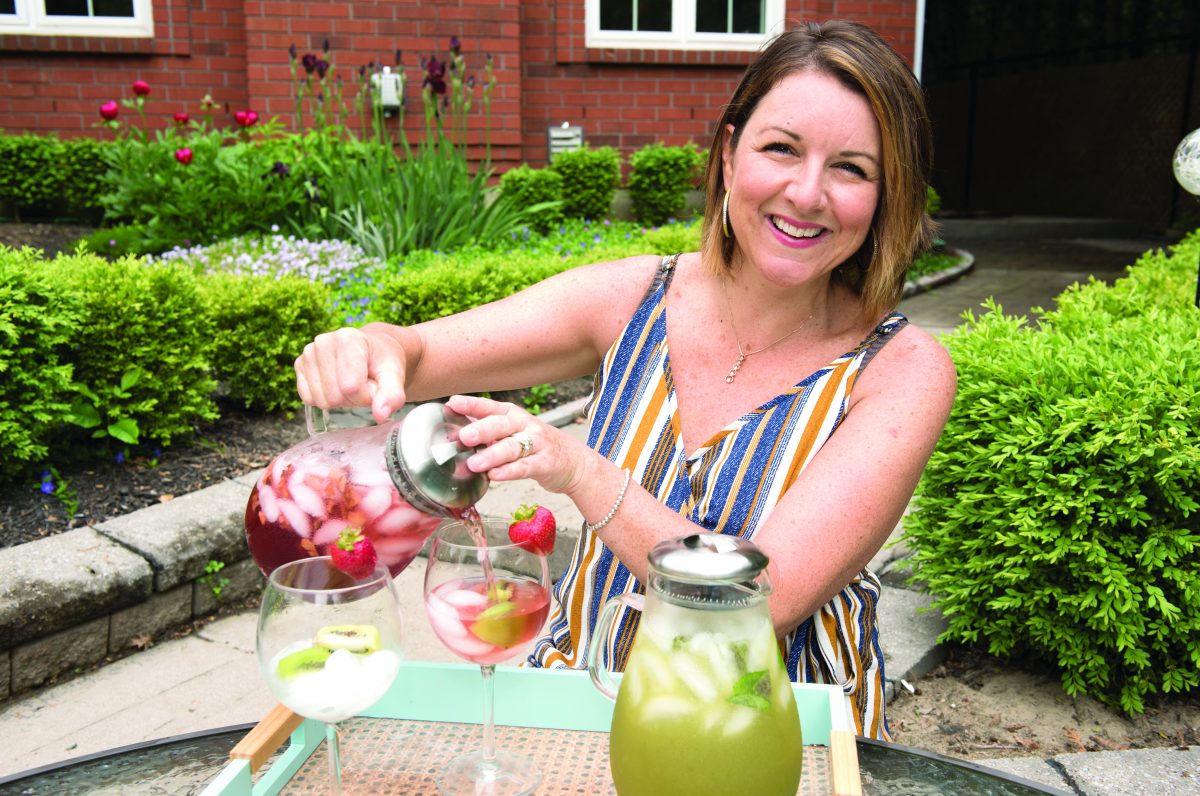 For Tonia Jahshan, a cup of tea changed her life forever. After experiencing a miscarriage, she and her husband Hatam escaped to a B&B in Halifax. A tea drinker, Jahshan was served a cup of Earl Grey tea. She couldn’t believe how fresh it tasted and wanted to share it with others. That cup of tea led to Jahshan founding Sipology by Steeped Tea in 2006. The Jahshans then went on to become one of the Dragon’s Den biggest success stories and today, her direct sales tea company has grown exponentially.

Jahshan lives in Ancaster with her husband, who is also her business partner, as well as their three children. In person, Jahshan is as refreshing as the watermelon fruit iced tea she whipped up earlier.

In her kitchen are two jars of fermenting kombucha – an increasingly popular beverage with myriad health benefits and among Sipology’s products. Jashan opens the tap, bottles the black tea kombucha and adds Peachy Keen tea to flavour it. Her creativity and passion for all things tea is clear. Then again, you’d imagine her being passionate about anything she turns her attention to – she’s that kind of person.

Did you have any fears about appearing on Dragon’s Den?

No. I didn’t. On the other hand Hatam said, “Are you crazy? We’re not going on Dragon’s Den.” His biggest fear was Kevin O’Leary calling him a cockroach on national television. But I had a feeling it was going to go well. We have a great story, we have a great product. So we really prepared. For a month we literally studied every episode of Dragon’s Den.

Dave Chilton is still very supportive. Jim Treliving and his wife, Sandy, have become really close. Sandy is on the board of CAMH and we’re launching a new kid’s help line in the U.S. Because of that relationship we built with Jim and Sandy over mental health, it’s more than just business, it’s about friendship.

You’ve been listed as one of Canada’s top female entrepreneurs. What kind of qualities does it take to be an entrepreneur?
Guts, vision and perseverance. I do a lot of speaking engagements across Canada, and the one thing I talk about is, as an entrepreneur, there’s so many risks. Risks like Dragon’s Den has panned out for us, but then other decisions don’t.

How do you handle it when it doesn’t pan out?

It takes a lot of perseverance, optimism, strength and courage to get through those tough times. I’ve learned a lot about myself when it comes to stress.  I meditate in the morning, try to exercise every day and eat well. I think of all the positives in life. The last three years we’ve made some choices that weren’t great. Jim said, “Tonia and Hatam, I’ve been in business for 60 years, what you’re going through is normal.” You just need someone to tell you that.

You and Hatem work together, are there any strategies you’ve developed to keep work and home life separate?

We have three young children and sometimes it’s really hard to separate the two. Our offices are far apart in the warehouse and we knew we had to stay in our lanes. I’m marketing, sales, visionary. He’s operational, finance. Sometimes we cross lanes, but we get back. And at home there’s no talk of work after 9 p.m. None.

What are some of the current trends in tea?

Matcha tea from Japan. You consume the whole leaf, so you’re getting amazing antioxidants. We have different types of flavours: vanilla, chocolate, peach. I put it in lemonade or add it to smoothies.

We also have a kombucha line. It took Hatam about a year to develop it – he’s also a chemist and a master at figuring out blends.

If you were to take tea anywhere in the world, where would it be?

I’ve never been to England. I would take high tea at the Savoy in London. It would be amazing: scones, clotted cream. Or Tiffany & Co. in New York. They recently opened up a tea salon in their store, and there’s already an eight month wait list!