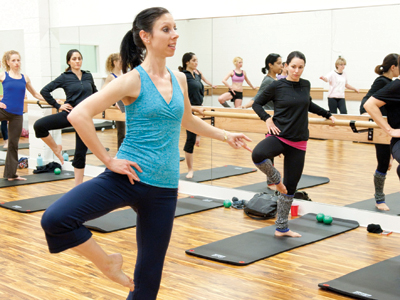 Sometimes a change is as good as a rest, and that's especially true when it comes to fitness goals. After all, it's only been a few months since you declared your resolution and a rest might lead to regret. Bust the boredom of the same old routine with a little ballet, boxing or after burn, because a change might be exactly what the trainer ordered to knock the routine out of your fitness program.

“There's something about hitting a bag or hand pads that's a stress release,” says Amanda Cabral, co-owner of Just Train It with her husband, Steve Cabral. “Most people who come here have never boxed before and are looking for something new, something different, to incorporate into their fitness routine.” Just Train It offers personal training that incorporates boxing into the client's regime, but its boxing classes with less than 10 people are most popular. People who are tired of regular gyms are attracted to the boxing because it is fun, says Amanda.

And let's face it, a bit primal. Here you can lift weights, slim your middle and get in touch with your inner badass.

Boxing Basics
But Just Train It isn't about training people to become  amateur boxers, though the owners are able to facilitate that for those who want to. It's about introducing anyone ““ male or female, ages 6 to 62 ““ to the correct stance, technique and form necessary to develop a fitness routine that can burn up to 1000 calories per hour.

“Boxing is actually very safe,” says Amanda. Group classes begin with a warm up, then one to three minutes of different boxing combinations on different equipment, ending with abs/core strengthening. “We do have a ring,” says Amanda, “but no one will hit you.” For those who really want to try out their newly developed technique, Steve works with a trained boxer who will suit up and play defense for you. However, first you must learn the proper technique: how to hit with extension and twist to get the maximum benefits to the core.

The boxing classes are not a fluffy workout or “˜boxercise,' but learned technique with a certified boxing coach with eight years experience training actual fighters. But Amanda emphasizes it's also not an intimidating experience: “My husband is not a big tough guy,” she says. “He builds people up gradually, and even in classes there's individual attention. We have equal men and women participating … and Saturdays we have a group of moms who've booked a private class.”

“We are the only licensed boxing gym in Oakville,” says Amanda. Just Train It isn't a membership gym, but focuses on classes offered twice most days (only once on Friday and none on Sunday). Participants book online. An introductory class is complementary, so there's no excuse not to try it, except maybe you might get hooked: “About nine out of ten people who try once, come back,” she says.

Ballet Body
If hitting the bag is too butch for your feminine sensibilities, fantasies of a dancer's body might be your motivation of choice. If you're nostalgic for the classical dance moves of your childhood (or missed out on ballet lessons entirely) now you can rekindle an inner connection with all things graceful and elegant. Barre Life Studio is Oakville's first fitness club to offer the Barre method of training, which has been very popular in the U.S. for decades. What started 20 years ago as a way for dancers to train and recover from injury, has evolved into a workout designed by former dancers (called barretenders at Barre Life) that fuses yoga, Pilates, ballet and strength training movements while using the dance barre, resistance bands and weighted balls.

“The advantage of this technique,” says Barre Life owner Niki Corion, a former dancer and now 41-year-old entrepreneur, “is increased flexibility and a longer leaner look.” It's low impact and safe on the body by using small weights, two or three pounds. “The emphasis,” she says, “is on form and technique that engages the core and works the entire body.”

Barre Life has created its own certification program, so when you sign on you get a unique barre workout program, as you would at any barre studio, Corion says. Also, she asserts, if you dedicate yourself to it three to four times a week you will feel differently in two weeks, and definitely see a difference in four weeks. “Dedicated participants feel stronger and more flexible, stand taller and say their clothes feel bigger,” Corion says. Unparalleled results is the claim.

The studio offers about 34 classes a week, from Barre sculpting, stretching, core and cardio to lower body, upper body and even a classic ballet 101 option for those who envy their kids' classes. “There are a lot of ballet classes for children in Oakville,” Corion says, “but none for adults. So we saw a demand for that.”

Generally speaking, Barre fitness is a dancer's workout without the dancing. Grace is not required. “That's the biggest misconception,” Corion says. “You don't have to be coordinated to do this and all the instructors show modifications to the routine.” So far, she says, after a few months in existence there's been a fantastic response to the idea, primarily from women. Anyone can try it with an unlimited two-week pass for $39, and the converted can purchase individual classes or unlimited six month or one year passes.

Optimal Orange
Sparkling new and shiny orange, Burlington's latest workout concept is a franchise that grew out of the popularity of High Intensity Interval Training (H.I.I.T.): Orangetheory's one-hour intense classes are something that must be experienced rather than explained, and that's why introductory classes are complementary. “You have to do the workout in order to understand it,” says co-owner Sherri Staffen, a former public health nurse attracted to both the values and business model of this three-and-a-half year old corporation.

Burlington's Orangetheory, owned by husband and wife team Sherri and Tim Staffen, is a results-oriented fitness club that focuses on classes of about 24 people, all wearing heart rate monitors, and burning up to 1000 calories per hour. One half start on treadmills being prompted by a microphoned trainer telling them when to speed up and slow down, increase and reduce the incline, during a 30-minute period. Loud music pumps up the endorphins dance club style and everyone's encouraged to go, go, go. Yet beginners workout alongside marathon runners.

Participants have the option to choose their own intensity ““ walking, jogging or running ““ but must watch their heart rates on television screens that tell them if they are in the green, orange or red zone.

For optimal benefit, heart rates should be in the orange and red zone for 12 to 20 minutes during the entire workout. (Readings are provided at the end of class). If you do, Staffen says, you will experience “after burn,” an elevated metabolism that will continue to burn calories up to 36 hours after the workout. During the second half of the class, people run between a series of strength training and rowing exercises, explained on screen and demonstrated by a trainer. Another offers much needed assistance to those confused or in need of modifications.

“It's like getting a workout from a personal trainer at a fraction of the cost,” says Staffen. “And it's not like a trend that's going to come and go, but based on science. After all, treadmills, rowing machines and weights have been around forever.”

The club is about the classes only, and fees are based on how many a week members plan to attend. “There's no down time. No waiting for machines,” says Staffen. “It's for people looking for someone to lead them so they don't have to think, and someone who will motivate them. Group energy is very motivating.” And so is the colour orange, according to science and Orangetheory. It fills the gym with an effervescent hue that leaves you a little light-headed and unaware an hour flew by … or maybe that was the cardio push to the red zone. Either way, Orangetheory means business, and results.