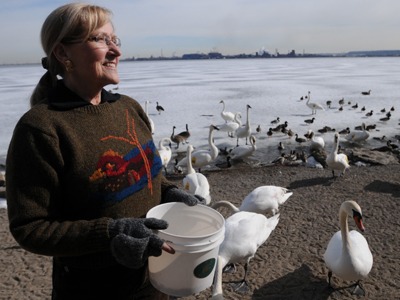 Against a backdrop of smoke stacks and nestled amongst the beauty of 57 acres of parkland, lies Burlington's very own swan lake. Every winter hundreds of majestic trumpeter swans flock to LaSalle Park where they call the shallow shores of Lake Ontario home.
For much of the winter, Beverly Kingdon also calls this particular cove home.
“Come on swans,” she says, making her way along a sandy path, with a bucket of whole organic corn in tow. “It's amazing, we we're able to turn this around. We were able to undo the damage of the past.”
It was 1886 when the last trumpeter swan was shot by a hunter at Long Point, Lake Erie. Once plentiful in Ontario, the indigenous trumpeter population quickly dwindled as they increasingly became hunted for their brilliant white coats.
A lot has changed since the late 1800s, and local nature enthusiasts have Kingdon to thank.
In the early '80s biologist Harry Lumsden launched a trumpeter swan reintroduction program, and Kingdon jumped right on board. She volunteered her time and her pond to raise two trumpeters. When the program started, there wasn't a single trumpeter swan in Ontario. Today, there are more than 1,000 in the south-central part of the province.
It didn't take long to convince Kingdon to get involved in the effort. By that time, the Burlington resident's love of swans had been years in the making.
“When I was eight I saw a swan for the first time, and that finished me,” she recalls. “I hung on to the railing of an old bridge as a swan passed under and said “˜I'm going to have one of those when I grow up.' But what does an eight-year-old know about ever getting a swan.”
Today, the 68-year-old enjoys the company of about 200 in Burlington. And not just any swans ““trumpeters ““ the largest North American waterfowl species.
Since the mid-90s Kingdon has been monitoring the swans of La Salle Park, and throughout Ontario. Together with husband Ray and Kyna Intini, a biodiversity graduate student, Kingdon tags hundreds of swans each winter and monitors them daily. The bright yellow tags help scientists and bird watchers track the swans' migration and nesting patterns. By feeding the swans, the three bird-lovers can earn the creatures' trust, which makes tagging them much easier.
Kingdon says she's “on call” seven days a week, often travelling several hours a day to various nesting places. During the summer, she migrates with the swans, spending much of her time at her northern Ontario cottage.
Along with the time commitment, Kingdon has undertaken a huge financial commitment in the effort to restore the population.
“I haven't been given a wagon load of money,” she says, estimating last year's corn expense was about $8,000. Kingdon also covers vet bills and the cost of wing tags and leg bands.
But she says the price tag is well worth it.
“What's really nice is the positive aspect of people's attitude. Every year hundreds of people express their appreciation, and look at what's available now that once wasn't.”
Occasionally, regular swan spotters will help Kingdon by purchasing corn and others make monetary donations. Burlington is now home to Ontario's highest concentration of trumpeters, and along the way, Kingdon has become a fixture at LaSalle Park. She says along with restoring one of Ontario's most majestic creatures, the friendships the retiree has made are priceless.
“It's like tossing a pebble in the pond and watching the ripples go out. I've made so many friends. I've had couples from Australia and Germany come visit me. Many people come with Tim Hortons gift cards for hot chocolate on a cold day and one fellow dusts the snow off our car in the winter. They do gentle, tender things.”
The only word she has to describe the experience is “wonderful.”
“People always come back and see the swan lady.”