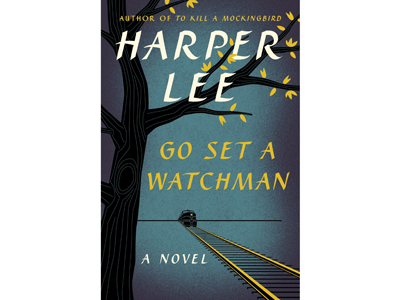 FICTION
Go Set a Watchman: A Novel
By Harper Lee
In an historic moment in literature comes a newly discovered novel from Harper Lee, author of the Pulitzer Prize-winning classic, To Kill a Mockingbird. Harper's earliest known work, Go Set a Watchman was originally written in the mid-1950s and is the first work she submitted to her publishers. Assumed to have been lost, the manuscript was discovered in late 2014 and hit shelves in June. Featuring many of the characters from To Kill a Mockingbird, but 20 years later, the story follows a grown Jean Louise Finch-Scott as she returns home to Maycomb to visit her father, struggling with issues both personal and political in nature involving Atticus, society and the small Alabama town that shaped her, all the while casting a fascinating new light on Harper's endearing classic.
$34.99; harpercollins.ca

In The Unlikely Event
by Judy Blume
New York Times #1 best-selling author and author of young adult classics like Are You There God? It's Me, Margaret, is back with the release of her latest work of fiction In The Unlikely Event. In 1987, Miri Ammerman returns to her hometown of Elizabeth, New Jersey to attend a commemoration of tragic events that happened 35 years prior when she was just 15. The worst year of her life, Miri experienced her first love alongside a succession of airplanes falling from the sky that left the community reeling. Blume vividly paints a portrait of a time and place where airline travel was new and exciting, creating new dreams, framed by Elizabeth Taylor haircuts, A-bomb hysteria and more.
$34; penguinrandomhouse.ca

The Diver's Clothes Lie Empty
by Vendela Vida
Acclaimed author of Let the Northern Lights Erase Your Name and The Lovers, Vendela Vida's new literary thriller The Diver's Clothes Lie Empty explores the heart of what defines us as human beings.  Following the story of a woman travelling to Casablanca, Morocco on mysterious business, who is immediately robbed of her passport and all identification, she feels both burdened by the crime itself and liberated by her newfound freedom to be anyone she pleases. Through a chance encounter she finds herself being asked to play the roll of body-double, both on-set and off, for a reclusive film star who is filming in the city. A vibrant novel filled with lush detail, The Diver's Clothes Lie Empty explores freedom, power and the mutability of personal identity.
$19.99; harpercollins.ca

YOUNG READERS
What Pet Should I Get?
by Dr. Seuss
The literary equivalent of a buried treasure, a new never-before-seen picture book from Dr. Seuss hits the shelves this July. Told in Dr. Seuss's signature rhyming style, What Pet Should I Get? is the story of a brother and sister visiting a pet store to pick a pet, and naturally, they can't decide on which one! Capturing a classic childhood moment while teaching the life lesson that it's hard to make decisions but sometimes you just have to do it! Featured at the end of the book is an Editor's Note discussing Dr. Seuss's own pets, his creative process and the discover of the manuscript and illustrations for this no-longer lost tale. For ages three to seven, available July 28.
$21; penguinrandomhouse.ca

FOOD
The Canning Kitchen: 101 Simple Small Batch Recipes
by Amy Bronee
Acclaimed Canadian food blogger Amy Bronee of FamilyFeedbag.com, and one of Western Canada's Top 40 Foodies Under 40, brings us a modern take on a beloved tradition with The Canning Kitchen: 101 Simple Small Batch Recipes. With 101 simple, small batch recipes and vivid photography you'll be filling your cupboards with classics like Strawberry Rhubarb Jam and Crunchy Dill Pickles and new classics like Salted Caramel Pear Butter, Bing Cherry Barbecue Sauce and Sweet Thai Chili Chutney in no time. Included in The Canning Kitchen are all the basics you need to start canning, tips on choosing seasonal ingredients, straight forward answers to common preserving questions and a step-by-step checklist to ensure the safe preservation of each batch.
$29; penguinrandomhouse.ca