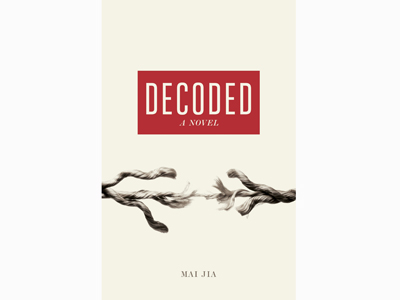 FICTION
Decoded
by Mai Jia
Rong Jinzhwen is a semi-autistic mathematical genius. Recruited by China's Secret Services, Unit 701, in order to break the elusive Code Purple, Jinzhwen rises through the ranks eventually becoming China's most celebrated code breaker ““ until he makes a mistake and begins his decent into darkness and madness. A gripping story of genius, brilliance, insanity and human frailty, Decoded tells the tale of a deeply flawed and fragile, yet exceptionally intelligent, human being. Combining elements of historical fiction and state espionage, Decoded garnered immediate success in China upon its 2002 release, landing on Canadian shelves in its much-anticipated first translation on April 1.
$30; penguin.ca

Circus
by Claire Battershill
A debut collection of award-winning short stories, Circus features an unforgettable cast of characters on the cusp of enormous change. A young family moves into an idyllic country home only to have their dreams of pastoral life disrupted by the inconvenient presence of two elderly shepherds. A hapless English bureaucrat with a long history of failed dates gives himself 31 days to find love on the internet. And in the CBC Literary Award-winning title story, the granddaughter of a former circus performer finds herself grappling with the capriciousness of life and love. Together, these funny and entertaining, poignant and wise stories form an extraordinary reminder that sometimes everyday life can be the greatest show on earth. Available April 8.
$22; mcclelland.com

KIDS
The Fly
by Elise Gravel
The Fly, the first in a seven-book series entitled Disgusting Critters from Governor General award-winning illustrator Elise Gravel, delves into the life of the common housefly. Humorous and informative, The Fly is perfect for beginner readers covering topics such as the hair on a fly's body (it requires a lot of shaving), its ability to walk on ceilings (cool, but hard to play soccer up there), and its love of disgusting food (garbage soup, anyone?). Although silly and off-the-wall, The Fly contains real information and strangely adorable illustrations to help engage new readers.
$12.99; tundrabooks.com

ART & HISTORY
A Day at Versailles
by Yves Carlier; photography by Francis Hammond
One of the most beautiful and fascinating achievements of 18th Century French art, the Chí¢teau de Versailles has welcomed tourists the world over to take a glimpse into the elite lifestyle of those who once called the palace home. In A Day at Versailles, we are taken through this exquisite setting's hidden places and private spaces including the gardens and pavilions, to the charming Petit Trianon and dairy farm created for the pleasure of Marie Antoinette, giving the reader unprecedented access to this historical treasure. Available April 1.
$34.95; rizzoliusa.com

HUMOUR
Listen to the Squawking Chicken: When Mother Knows Best, What's a Daughter To Do? A Memoir (Sort Of)
by Elaine Lui
“Why do you need to prepare for the good things that happen? They're good. They won't hurt you. My job is to prepare you for the hard times, and teach you how to avoid them, whenever possible.” These are the words of wisdom Elaine Lui, host of CTV's The Social, longtime Etalk reporter and the voice behind Lainey Gossip, received from her mother, the Squawking Chicken. Although Lui once fought against her unorthodox upbringing, neither traditionally Eastern nor conventionally Western, she eventually came to recognize and appreciate the hidden wisdom and immeasurable value of her mother's unusual life lessons. These lessons range from those on humility (“I should have given birth to a piece of barbecue pork.”) to finding one's own voice (“Walk like an elephant, squawk like a chicken.”). Listen to the Squawking Chicken fuses memoir and comedy in a unique read that will have you reconsidering the honesty and guts it takes to be a parent. Available April 1.
$27.95; randomhouse.ca

PHOTOGRAPHY
Women of Vision: National Geographic Photographers on Assignment
compiled by National Geographic
A tribute to the spirit and ambition of the female photojournalists and artists who have contributed to the pages of National Geographic over the past decade by created riveting visual experiences through the insightful, sensitive and strategic use of camera. With an introduction by Chris Johns, editor-in-chief of National Geographic magazine, and a thoughtful foreword by Ann Curry, Women of Vision presents both personal reflections and stunning selections of photographic assignment work. From the last great wilderness of Africa to the flash and tumult of the Jersey Shore, the elegant landscapes of the Mongolian steppes to the war-torn battlefields of Iraq, these photographic stories tell the tales of the realities of our world and the depths of what it means to be human in the 21st century.
$35; nationalgeographic.com