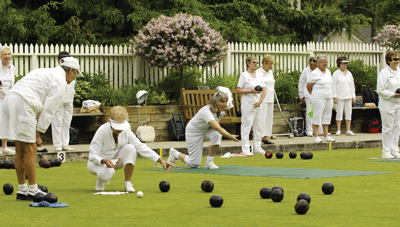 Peel back history and you’ll find the pastime has gone by many names, among them, Bowls, Bocce, Bowling on the Green and Lawn Bowling. Whatever you call it, it’s one of the oldest sports of record. England’s Southhampton Old Bowling Green Club is the world’s longest-standing, rooted back to 1299 AD.

“Lawn bowling goes back thousands and thousands of years,” says Diane Winn, a six-year veteran of the sport who manages membership and publicity for the Oakville Lawn Bowling Club. “They discovered some form of lawn bowls in ancient Egyptian tombs. It has quite a big history, and it was played a lot by royalty in the 15th century.”

The royal roots explain the gentile nature of the sport as we know it today, Winn adds.

“It’s a very polite game, and you know, everyone shakes hands before and after the game, says thank you. You never criticize anybody who does anything wrong or doesn’t bowl well. That’s an absolute no-no. You encourage people.”

The rules of the game have changed and evolved as the years have passed, but the object remains the same: to get one’s bowls (the balls that are bowled) closest to the “jack”.

A small white ball ““ the jack ““ is located anywhere from 75 to 108 feet away from the bowlers, who play in teams of singles, pairs, triples or fours. Triples, the three-on-three games, are the most popular.

The rules are similar to curling, where bowlers score points for getting their bowls the closest to the jack. And just as curlers have ice to contend with, lawn bowlers are up against another challenge.

“The bowls aren’t completely round. They’re curved,” Winn explains. “It’s a strategy, and you have to learn to be accurate.”

It’s the strategic nature of the game that attracts many to lawn bowling. Of course, what happens on the greens isn’t the only reason people are attracted to the sport.

A 10-year veteran of lawn bowling, Mary Wooton picked up her first bowl at the Burlington Lawn Bowling Club because she was new to the town and wanted to meet people.

“I really like the social aspect,” says Wooton. “Lawn bowling was one of my first outreaches when I moved to Burlington. We have bowling every afternoon, and it seems every evening there’s something social going on at the club.”You meet a lot of people, make a lot of friends.”

Another beauty of the game, she adds, is anyone can play it.

“I’m not an athlete by any stretch, I’ve never really been, but I play, and I thoroughly enjoy it. It’s something anyone can play, athlete or not. And at any age.” It’s the reason the majority of members in both Oakville and Burlington are aged 45 and above. In fact, Oakville is home to a member who’s 92 years old and still playing.

“It’s particularly good for older people who can’t be involved in a more active sport,” Winn says. “People with some disability can play, people who have knee and hip problems, things like that, they can still bowl. It’s a great outdoor activity that can be played right through old age.”

The Oakville Club, which is in its 101st year, boasts a nearly 200-person membership, plus about 30 associate members. The latter are members who don’t bowl, but participate in the social activities with other club members.

With each passing year, the Oakville Club is growing.

“Last year we had quite a substantial growth,” Winn says. “I think we had about 35 to 40 new members. It’s because it’s a great game, and our green is in such a pretty area by the lake. It’s very nice to be down there in the summer.”

Burlington’s club membership numbers above 200, and includes national team members. Wooton says part of the reason the club is so active and competitive is because of the state of the 16 greens.

They’re not only attracting the over-45 crowd, either. Burlington’s club is home to 10 to 15 players in their 20s, and four of them play at the national level for Canada.

“That’s what we want,” Wooton says. “We’re trying to recruit younger people to the sport. I think we’re making headway here in Burlington with the younger generation. The progress has been slow, but it’s happening.”

The battle is getting young people to give the game a chance in the first place.

“It’s that stigma, like my daughter says, “˜Oh really, mother, lawn bowling?’ We’re still fighting that,” Wooton says. “But anybody that has the confidence in themselves as a young person should be out there. It’s a great, competitive game.”

Many of the younger members of the club got into the sport because their fathers were playing, and others have joined because their friends took to it.

“I think that’s the challenge. Once you can get them in and they see it’s like curling, it’s got the same strategy, and it is physical. They of course run while they play. And this is something you just don’t outgrow. You can play forever.”

While the stereotype of an elderly crowd dressed in white playing the game is what many associate with lawn bowling, Wooton says the game is slowly changing and drawing a variety of people of a whole range of ages. Part of that might be because the rules aren’t as rigid as they once were.

“I think we all try to be polite to an extent, but you know what, it’s loosening up as anything else,” she says. “I was down there today in my jeans, you know?

“Usually you say lawn bowling and people picture us wearing all whites. It happens occasionally, at tournaments, but not all the time. It’s definitely civilized, but we don’t go overboard.”

Where to bowl West of the city