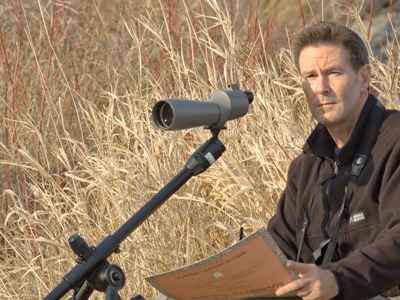 Michelangelo, when dying, was to have said he never got through the “ABC's with his art.” What to us may seem an incredulous statement; artist Chris Bacon not only understands,but relates to.
Bacon is considered to be one of Canada's finest painters. Though the subject matter of his creative genius is birds, he prefers not to be called an avian artist. “The paintings in the beginning were about the birds,” explains Bacon, “but they were simply vignettes. Then the paintings became more about me than the bird. I use them as a vehicle.”
Fortunate for Burlington, it has served as home to Bacon since he was 15. British born, he was uprooted at a tender age and travelled with his parents to exotic places such as Fiji. It is here, perhaps, that the bird “seed” was planted forever in his creative sub-conscious. Illustrating birds at age three, it was clearly the art that chose him.
Completely consumed by his work, Bacon is hard on himself. Admittedly shy, he was withdrawn as a student and in fact failed grade 13 art. “I was always painting, whether at home or off by myself somewhere in a field.”
While repeating his last year high school in preparation for OCA, something occurred that would essentially set the life path for Bacon. He was just 19 when Burlington's only art gallery at the time, Alice Peck, asked to show all 22 paintings Chris had accumulated. As the story goes, within three minutes they were sold out!
Robert Bateman has been a steady presence in Bacon's life since a young man. Upon seeing Chris' work in his early teens, he invited the aspiring artist to his home.
“Though critical, he was right. He came to the Peck show and was still critical! But he stayed helpful and kept interested. In 1967, between Bob (Bateman) and a friend's advice to forego OCA, I realized it was time to pull up my socks and establish myself to survive as an artist.”
Bacon's next big show would be in 1982, arranged by Thomas Beckett. In fact, it was the first time Bateman would say something positive about his work. But it would be in 2004 when Chris would experience a life-altering moment. He was honoured with the art equivalent of a Nobel Prize when he named Master Wildlife Artist. This was a happy time in the world of Bacon and is reflected in his work. Once afraid of colour, this period produced bold, big and brightly painted birds, such as cranes and flamingoes.
Choosing to not “go commercial” Bacon is saying no to galleries as he holds on to masterpieces, unseen and not for sale. Ever-developing, he sees his work as a piece in progress, even upon completion. More often than not they are never completed to his satisfaction, but the perfectionist must part with some, reluctantly, “as with a child.”
The paintings, quite simply, are exquisite. From a delicate, fragile marsh wren perched on a whisper of a branch to a majestic, audacious crane taunting the elements, they each express a piece of Bacon's inner self. Restless and reclusive, he cannot escape the birds as they are a direct reflection of the man at the moment.
“My paintings are self-portraits. I try to convey through the bird a feeling or thought I have had or even dreamt. And when I see that same spark in someone who has caught the exact feeling I had…it is then I am happy!”
Most recently celebrated at the Burlington Art Gallery, the show Alight was created as a retrospective of our own internationally recognized artist.
“I was pleased with this exhibition as it represents a third of my work. George Wale, a great curator, allowed me a lot of input.”
With 60 key pieces spanning 30 years, it was a connected body of work displaying Bacon's evolution. Hung chronologically, deep thought went into BAC's show. “We chose art from significant times, like the Beckett exhibit in '82 and the bird sketches my mom kept since a toddler. When I first walked into the exhibition it was overwhelming! Seeing so much of my art, I felt like it was a family reunion.”
Michelangelo said he would see an angel in the marble and chip away to get her out. Bacon feels ideas so subtle he must put them into the bird to interpret his art.
The sacrifice is unimaginable to most of us. Says Bacon, sadly; “I am becoming more withdrawn and it is a lonely process that has no end.”
Next time a piece of art should catch your eye, stop and look at it. Before your critique, take a moment to find the artist behind the art. If you look closely enough; he will be staring right back at you.