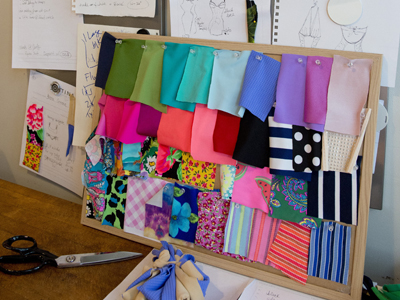 For local swimsuit designer Natasha Gatto it all began with a bra. Gatto knew by grade six that she wanted to be a fashion designer, but first she needed to pick up the basics. “I took the bra-makers course in Hamilton, which is a really great course, I learned a lot there ““ bras and underwear go hand in hand with swimwear ““ then I went to George Brown for sewing and techniques.”

In high school, once she had acquired her first sewing machine, Gatto began experimenting with different designs and, inspired by the pool in her backyard, started making her own swimwear. “I really enjoyed it and started making [pieces] for my friends and family and that's when I decided to do swimwear. I liked doing it, I liked designing it.”
It took only one year for her new brand ““ Gattina ““ to outgrow the confines of her parent's basement so, in 2014, Gatto packed up her pins, needles and fabrics and moved the company to its current location in Hamilton's Empire Times building.

All of Gattina's patterns are made from scratch, including the colour-blocked prints where Gatto pieces together different solids to make a standout design. “You think of a design and if you're able to draft it you can do anything,” says Gatto. “You just experiment and see what works and what doesn't.” The artistry of pattern making allows Gatto to create custom pieces for customers using their specific measurements, resulting in one-of-a-kind pieces that fit the way they should.

“Every designer has their own tastes and you can see it through their designs. I am inspired by different fashions, clothing and colours, and I find I'm always seeing what's on trend and that inspires my swimwear. I like simple things that are unique, that you don't see every day.”

Though Gattina is open for walk-ins and one-on-one consultations, her pieces can be purchased online, or in person at White Elephant in Hamilton and LoversLand in Toronto. Pieces range from $120 (one pieces starting at $120; two pieces starting at $140) up to $180, depending on customization. Customization includes custom fitting, fabric choice, underwire, etc.

What inspires you?
“A recent trip to California was very inspiring: the ocean, the greenery, the shells. Every day I would collect stones from the ocean and the colours of the rocks ““ shimmering, pink-y nudes, dark purples ““ helped to inspire the Resort 2015 line.”

What do you listen to while you work?
“I always like to put something upbeat and soulful on: The Alabama Shakes, Sam Smith, Elvis Presley.”

What is your design process?
“An idea just comes to me, but the biggest process for me is to sketch it out. I see how it looks on paper and from there I can decide where I want to go. Drawing all the different angles ““ the front, the side, the back ““ really helps me to get an idea of where the piece is going, and then, if I'm happy with it, I'll draft it. That's the most fun for me, the most creative part of the process, taking the drawing and making it into a pattern. To see it go from an idea in your head to a sketch on paper to the final product is really exciting.”