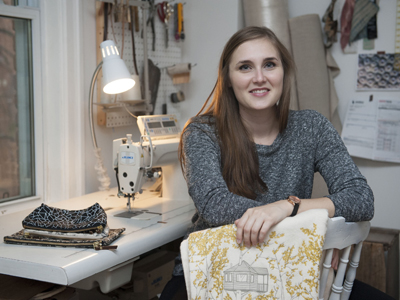 From the inception of a print to the fabrics and dyes used, 25-year-old Christina Obuch, owner and founder of textile studio Hatchet Made, grounds her work in nature. Collecting things she's found while hiking or walking around the city, the Oakville-born and current Hamilton resident uses these gathered goodies as the inspiration for her prints or to make homemade, natural dyes.

“My “Mountains” print is inspired by a seashell,” Obuch says of the almost geometric pattern. Once Obuch finds an item she selects an aspect of the object that she thinks will work as a design before hand drawing it, sending it to Photoshop where she can tweak it and repeat the pattern as needed, then exposes the design to a screen print through the use of a vacuum table in her basement. “It's all done in this little house,” she says of her home studio, “so [the work] feels very personal to me.”

Although Obuch has glided seamlessly into the role of entrepreneur of her own company since graduating from Sheridan College's Textile Design program in 2012, she originally planned on being a chef, even attending cooking school for a period of time. Realizing that, for herself, cooking was more of a hobby than a career, she enrolled in Textile Design. “I've always loved making things,” she says. “I would go over to my Nonna's house and we'd sit there and knit. I've always had this weird obsession with textiles ““ I collect a lot of tea towels.”

Interning with Arounna Khounnora of Toronto-based multidisciplinary design studio Bookhou gave Obuch the confidence she needed to start her own business. “I studied under her for a little while and it made me realize I can actually do this, she's been doing it for 11 years,” she says. “I was just starting out in school and it gave me a little kick to realize I could actually make this a business, I can actually do this with my life.”

Each and every product sold through Hatchet Made, from tea towels (not surprisingly, the first product Obuch ever sold) to napkins, and scarves to pouches and totes is created from start to finish by Obuch's creativity and her own two hands. Designed, drawn, cut, screen printed, dyed, dried, stitched, sewed and zipped by a one-man army, the end result is a high quality product with heart that could easily be mistaken for the extravagantly priced goods found in high end shops throughout downtown Toronto.

After graduating from Sheridan, Obuch immediately jumped on the opportunity to rent studio space with two classmates in Hamilton's Sonic Unyon building. “I didn't have any patterns when we started, we just opened the studio and started working and I began building a base of what I wanted to do. Ordering fabric, ordering all these materials, kind of playing around with things to see how I wanted them.”

While the essence of Hatchet Made came to fruition in 2012, Obuch says it wasn't until 2013 when the business fully launched. “It definitely takes a long time, but all that time was worth it,” she says.

Though social media has been a huge asset to the growth of Hatchet Made (“Instagram is like an artist's dream”¦ I probably wouldn't have been able to grow my business as fast if it wasn't for Instagram.”) it is the clear vision and a commitment to a quality product that you can be confident in that has been the company's biggest strength.

“I'm very selective about what I purchase and what I put out,” notes Obuch. “If I won't use a cotton tea towel because it doesn't absorb as much water as linen, I'm going to use linen for my products. I wouldn't sell anything to anyone if I wouldn't personally use it.”

Effortlessly taking on the roles of founder, designer, print maker and seamstress of her own company, Obuch says with a smile “Being an artist is hard work but it's worth it. This is my goal.”

DYES
Although Obuch mainly uses natural dyes purchased from a company in British Columbia she says “There are times when you have things in season, like walnuts are right now, so I go out and collect them. Last year I did a bunch of dying with black walnuts. Other things like goldenrod, birch bark, you can forage and make natural dyes with. You mix it with mordant to alter the dye and make it darker, lighter, brighter, and it makes it fun because you never know what you're going to get. I love it, I don't feel bad about using those dyes at all. I can use them or make them in my kitchen and not be scared about ingesting all this crud. When you hear “˜natural dye' it makes you feel safe and comfortable about wearing or using [the products].”

FABRICS
“I source [fabric] within Canada. I market myself as a Canadian artist so I try to do everything as locally as possible and try to make it as personal as possible. Fabric is probably the hardest thing to find. It gets discontinued, they change the colour or whatever else happens to it, and it can be a nightmare to find something new”¦ But, once you find it, you stick with it and it's beautiful.”