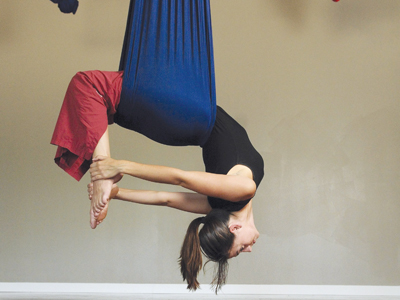 Yoga – already flexible, fluid and sometimes impressive – invites modernization, especially when studios are competing for bare feet on the floor.

Despite being a 1,000-year-old practice, our society yearns for change to keep people interested, exercising, and signing up to become one with mind, body and spirit. So here it is, this season's exercise trend imported to Burlington from New York City via Toronto: Aerial Yoga. Described as a basic zero-gravity yoga class moving through traditional poses with the help of a silk hammock attached to the ceiling,” it's a merging of traditional yoga poses using the silk for added support with an injection of acrobatic tricks such as “upside down bat,” and “backward cape flip.”

“What's interesting for me is to see where peo- ple's fears are,” says Lindsey Ilott, yoga instructor at Burlington's Be Yoga & Wellness. “Most people will try yoga when they are firmly planted on the ground but with aerial yoga, you start to see where your mind and body will fail you. You have to trust yourself, and trust the silk.”

The silk is not a philosophical concept or a Jedi force; it's an actual loop of thick shiny material hanging from clasps on the ceiling used by acro- bats a la Cirque du Soleil, and it's the newest trend in yoga practice. Ilott admits it was the fun stuff ““ what she freely calls “party tricks” during the class ““ that got her hooked on this new yoga hybrid.

Formally a gymnast, she loves the carefree ele- ment this practice offers. It's not about perfecting the art, just giving it a try, she says. “When I hear giggles in my class I know I'm doing something right. I love that.” At that point she's succeeded in taking the practice from something serious and focused to a freeing almost child-like experience. “I'm a 13-year-old at heart,” Illot adds, “I never grew up.”

“I love the sense of playfulness aerial yoga offers,” says Tracy Ng, owner of Be Yoga & Wellness. “It brings back our nature of being little kids, which we could all use especially in the age of cell phones and constant distraction. But Illot admits it's easy to get caught up in the fun and lose focus. “Yoga is about being in the moment, about finding your balance and your centre. Aerial yoga is just another perspective on the practice.”

It's also easy to get light-headed as I discovered swinging from the hammock in bridge poise. Admittedly, it's a pose (arching and grabbing your ankles behind your back) that I can barely complete on the floor, but in suspension it's much easier. With one foot on the ground, the loop of fabric offers some stability and I'm able to concentrate on core muscles moving from one pose to the next keeping one foot in the sling. Things get tricky when both feet come off the ground and the silk becomes, literally, a safety net I'm cocooned in. Now, if only the swing didn't, well, swing and the world would stop blurring around me. Apparently, a bit of discombobulation is part of the fun, and benefit.

At a beginner level, aerial yoga is about letting go and relaxing. According to Ng, it's good for decompressing joints and the spine. Hanging upside down allows gravity to realign vertebrate. Participants do need some yoga experience to understand the poses and know the difference between downward dog and pigeon, so the instructor can focus on the use of the silks, rather than explaining the basics. The added support of a sling allows participants to focus on the specifics of each stretch lunging further and opening wider. On a more advanced level, aerial yoga can get hard core, emphasizing strength training. Imagine crunching abdominal muscles from a suspended upside down position. That requires effort.

“This kind of activity appeals to gymnasts, figure skaters, and dancers,” Illot says, “because they already have a level of body awareness and are used to acrobatic moves.” Ng adds that the studio is planning to promote this type of yoga to athletic groups as another part of their training. Already, Burlington's world champion synchronized skating team benefits from the classes four times a week.

This aerial practice is only one part of the extension Ng sees this studio embracing. “We have a variety of families and age ranges in Burlington,” she says. “So we've added some classes such as gentle yoga for mature people, or those who've been injured. You can do the yoga from a chair if you have to. Also, there are kids programs, Karma days which support local charities, and yoga cross-training taught by a professional boxer. Formally called Kula Yoga, Ng has recently evolved her studio, Be Yoga & Wellness, to meet the needs of the community by offering different classes three to four times a day and special drop in classes for $8 each if someone doesn't want to buy class packages ($75 to $140) or a year membership. She also added additional services such as a naturopathy and nutrition advice.

Aerial yoga is not one of the $8 drop in classes mainly because it takes practice and some dedication to make it work, though not as much skill as you'd think.

To my surprise, once I learned how to wrap my wrists, the impressive flipping, hanging and wide-leg suspending wasn't as hard as it looks ““ doing it gracefully is. Moving seamlessly from trick to trick requires effort and upper body strength, and the ribbon does cut in when bunched into a thin strap rather than a wider brace. Like anything, it takes practice, but unlike most things this isn't about mastering it perfectly or appearing in the next big top show above the heads of thousands. Good thing too, because yoga I'll stick with, but only when planted firmly on the ground. However, judging by the growing interest in aerial yoga, I might be in the minority on this one.