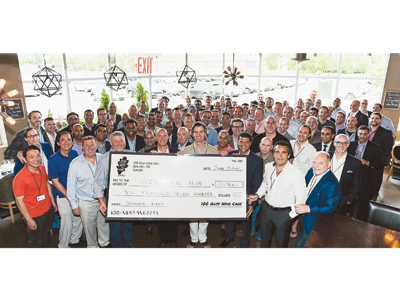 A couple hours of time, a few times a year and the desire to do good in your community. This is the basic concept behind the grassroots organization 100 Guys Who Care.

Initially launched by Karen Dunigan in November, 2006 in Jackson, Michigan under the name 100 Women Who Care, the concept was brought to Toronto in March, 2012 by Jennifer Wootton Regan and has since exploded in communities across North America.

Each member of the organization makes a yearly commitment to attend quarterly meetings where they donate $100 towards a nominated local charity. Everyone who attends is allowed to nominate a registered charity of their choice, of which, three are drawn at random. The members who nominated the three selected charities are asked to give a quick pitch, followed by a group vote on who is most in need of funding. This no-nonsense, rapid-fire concept allows for zero overhead so each charity receives 100 per cent of the donations raised.

Now, through the collaboration of Amir Gorgi and Donald Belovich the “100” model has been brought to Oakville and has already created quite an impact in the community.

“I was invited to participate in the 100 Guys of Toronto and attended a couple of quarterly sessions and thought “˜this is fantastic,'” says Gorgi. “In April [2015] I approached Donald and asked if he wanted to join the Toronto group but we both thought, “˜Why don't we look into starting a chapter in Oakville and make it more of a local thing.'”
Belovich was immediately on board with the idea. “I was really impressed with the grassroots and organic nature of this organization,” says Belovich. “It's like crowdfunding for charities.”

Held this past June at Tavolo Restaurant in Oakville, 90 men attended the inaugural event in person with almost 50 submitting their donations in lieu of attendance, raising a total of $13,800 for local charity Home Suite Hope.

“We focus on the smaller local charities where $10,000 can really make an impact. You show up with a cheque like that and you could be covering almost six months of expenses for them,” says Gorgi.

“$10,000 allows a small charity to do a tremendous amount of good,” echoes Belovich.

In order to cut out costs, Gorgi and Belovich reach out to different businesses in the community and members in the organization to provide a venue, food and drink and use word of mouth as opposed to advertising.

“We use social media and the website [to draw attention to the organization], most affectively, we reach out to members and say, “˜Tell a friend, bring a friend,'” says Belovich. “Word of mouth is huge for us. We work with the restaurants to promote as well; Tavolo put inserts in their menus with information on the event. It sort of grows from there.”

“The response in Oakville has been absolutely phenomenal,” says Gorgi. “Within 30 seconds people get it and want to know when the next meeting is.”
Although 100 is in the name, the organization is not limited to only 100 members and has an open doors policy to anyone willing to make the annual commitment.

“This is a great way to bring it all together in a platform that makes it super easy for people,” says Belovich. “People with busy lives who have great intentions but a hard time executing them.”

The next 100 Guys Who Care Oakville meeting will be taking place on Tuesday, September 22 at The Keg Steakhouse & Bar in Oakville.

BURLINGTON
All meetings for the Burlington chapter of 100 Women Who Care take place between 7:30 p.m. and 8:30 p.m. at the Burlington Golf & Country Club. The next meeting will take place on Wednesday, October 21.
100womenwhocareburlington.com

OAKVILLE
The next meeting for the Oakville chapter of 100 Women Who Care will take place on Monday, September 21 from 6:30 p.m. to 7:30 p.m. at Salvatore's of Oakville.
100womenoakville.com

HAMILTON-WENTWORTH
All meetings of the Hamilton-Wentworth chapter of 100 Women Who Care take place at the Bay City Music Hall in Hamilton beginning at 7:30 p.m. The next meeting will take place on Wednesday, September 30.
100womenhamilton-wentworth.com