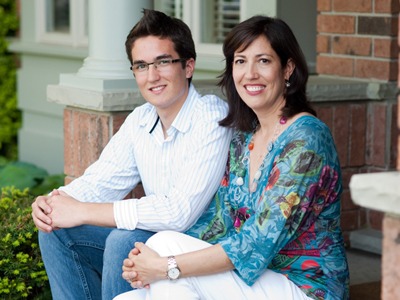 In 1998 Ann Morrison was told something no parent wants to hear: Gavin, her five-and-a half-year-old son, was going blind. Diagnosed with Retinitis Pigmentosa (RP), a genetic degenerative eye disease, Gavin was marked with the fate of slowly having his vision close in on him. Where most people have 160 degrees of vision, Gavin, who is now 19, has only 18 degrees.

After taking Gavin to the doctor and learning that he had no night vision, the first sign of RP, the Morrison's were told that one of them had carried the gene that gave Gavin his disease. “You want to give your kid everything,” says Morrison, “and we felt that what we had given him was not ideal”¦ It comes from us.”

Rather than sitting back and letting RP win, Morrison decided to take action. First she went to a patient conference to learn about the disease, where she discovered The Foundation Fighting Blindness (FFB) and their research on eye diseases.

One restless night, Morrison went to her computer and started writing an email to friends and family to tell them about Gavin's disease and the FFB. “It was sort of my way of coming out, of saying, “˜It's okay, we can talk about this now, we're in a good place,” says Morrison.

“[In the email] I said, “˜There is a foundation called The Foundation Fighting Blindness that is funding vision research here in Canada. This is where our hope lies. If, in your charitable budget, you have room to support one other good cause, it would mean a lot to us if you chose this small organization.' And that's when people started responding and making donations.”

One friend in particular, Meg Soper, a nurse and stand up comedian, knew another way she could help: her comedy. Soper proposed the idea of throwing a fundraiser for RP with the funds going to the FFB, and instead of having the regular boring fundraiser, they would have a night of stand up comedy. So, in 1999, Comic Vision was born.

They have come a long way since that first night of fun and fundraising. Comic Vision raised $690,000 in 2010, and more than one million dollars in 2011 for The Foundation Fighting Blindness.

Comic Vision began in Toronto, and now takes place in London, Oakville, Toronto, Vancouver and Calgary, boasting such names as Deborah DiGiovanni of Much Music's Video on Trial, Graham Chittenden, and Adam Growe of The Discovery Channel's Cash Cab.

In the fall of 2004, Morrison began working for the FFB as the Director of Philanthropy dealing with annual giving and major gifts. Some of Morrison's responsibilities include looking after donors who are supporting the foundation, creating proposals to bring people on board for funding big research projects, as well as attracting, and maintaining, sponsor relationships. “I [am] particularly proud of our ability to attract sponsors and to maintain those relationships and build those partnerships with corporations, as well as businesses in each community. We get people who are affected by blindness involved in our committees.”

Morrison maintains that without the help of friends, family, volunteers and committees, Comic Vision would not be possible. “I am so inspired by the people I get to talk to and who I meet. They're inspirational. I keep saying to Gavin, “˜Don't let other people define your limits.'”

Thanks to the help of Comic Vision, the FFB has been able to identify one of the 150 specific gene mutations that can cause RP, and has begun human drug trials to help stop the progression of degenerative eye diseases.

“It's not just for Gavin, and it's not just for the people I've met. There are almost a million people in Canada who are affected by blinding eye diseases”¦ Everybody who supports us is part of curing blindness, don't you think that's a really cool thing?”