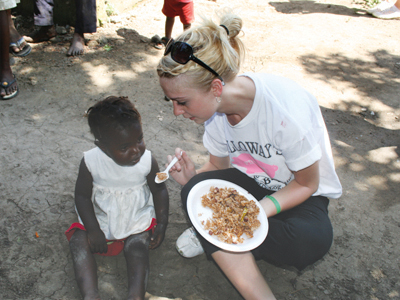 At home or in Haiti, Joanna Baumgartner and her family ““ husband Joe and four daughters, Allie, 23, Jordana, 19, Caroline, 17 and Maya, 12 ““ are taking care of some of the most vulnerable babies and children in the world.

In fact, wherever the Baumgartners go, even on holiday, they take off a few days from playing in the sun and sea to volunteer in a local orphanage.

“I find out what the needs are before we go, then take up a collection with family and friends. When we deliver it we stay for a couple of days to help in whatever way we can,” says the family matriarch.

That's how it has been for the past seven years, on trips to St. Lucia, Dominican Republic and Cuba.

While holidaying in the Dominican Republic in January 2010, neighbouring Haiti was hit by a devastating earthquake killing 300,000, injuring 300,000 more and leaving one million people homeless.

True to their holiday habit, the family was in the Dominican Republic two days after the January 12 quake volunteering in an orphanage when an influx of Haitian children arrived.

“It was divine intervention that brought our focus to Haiti,” believes Baumgartner.

With help from a family charity called Then Prove It, based in Georgia, she was introduced to Haiti and discovered that more than any other country she'd volunteered in, the living conditions in Haiti were 10 times worse.

One year after the quake, Baumgartner created her own family charity called B the Hope for Haiti, which is dedicated to improving the lives of the children of Ouanaminthe, a city of 100,000 people in the country's northeast. B the Hope for Haiti is a grassroots effort that consists of the spirited sextet making two eight-day missions per year.

“We have such an affinity for Haiti and the beautiful people there whose faith remains unshakeable, despite such dire poverty and disaster,” says Baumgartner.

The devastating 2010 earthquake did not hit Ouanaminthe but the area has lived with poverty and despair for generations due to decades of irresponsible and corrupt government.

“The desperation and overwhelming need there tears at your heart, you see kids naked and barefoot with distended bellies from malnutrition and no family around for them,” she says.

B the Hope for Haiti focuses on the immediate needs of children and families in the areas of education and health while working toward sustainable living to give families independence and dignity.

Working with the registered charity Empower Global, and a pastor who has built three schools in the poorest parts of Ouanaminthe, the Baumgartners' past missions have included building safe washrooms, installing a water purification system and running a medical clinic.

The long-term goal is to build a small storefront adjoined to the schools to house a water system and bread oven. The money generated from the bread helps cover the salaries of the teachers (who earn $2 per day) and teaches the school's 400 students skills that will improve their lives.

With only a Facebook page to solicit donations for B the Hope for Haiti, and all of the Baumgartners' travel expenses paid out of this one-income family's pocket, the family operates on a wing and prayer and the philosophy that no job that is worth doing is easy. “We're not rich. We're not even well off. But sometimes you just have to go out on a limb,” says Baumgartner.

The family's giving spirit is a way of life.

While on home turf, the family fosters alcohol and drug addicted babies through the Toronto Catholic Children's Aid Society (CAS). They have been doing this for 16 years. “This too was my calling,” says Baumgartner, who worked in a daycare before leaving the paid work world to volunteer with the CAS.

“I can't imagine a better way to bring joy into our lives,” she says. “I believe everyone gives in their own way, this is just our way.”