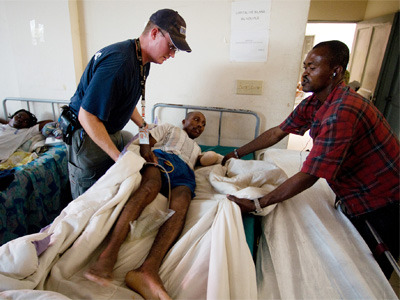 Burlington family set to come home after a year of volunteering in Haiti.

It began as a yearlong mission. Grant Rumford would leave his home and job as a Halton region paramedic to help run a medical clinic in Haiti. His wife and kids would join him on his journey and volunteer their time with Haiti's Mission of Hope.

It turned into a struggle for survival as January's earthquake wreaked havoc on the already impoverished region and thousands of Haitian, some near-dead, poured into the mission.

Now, as the Rumfords spend their final weeks in Haiti, they reflect on their stay, after witnessing one of the world's deadliest natural disasters followed by an outpouring of international aid.

“I think we all suffer from some post-traumatic stress as a result of the quake. Whenever a big truck goes by and the earth shakes, I still get a nasty little adrenaline rush,” says Rumford.

In September 2009, Rumford, his wife Sandy, and their four children left their Burlington home for a 1,200 square-foot concrete apartment, located just north of Port-au-Prince in the Mission of Hope compound.

“I saw horrific trauma the first night (Jan. 12). It carried on for weeks as more and more victims arrived at our clinics,” Rumford says. “Some images will be with me forever.”

Rumford travelled to Haiti in hopes of establishing an ER and ambulance services in the clinic. Prior to leaving Burlington, the Rumfords were trying to raise $5,000 to ship a donated ambulance to the compound ““ it would be one of the few ambulances in the country.

Thankfully, the epicentre of the earthquake struck 30 kilometres south of the Rumfords' home. The family made their way outside and out of harms way, but within no time at all the death and destruction made its way to the Rumfords' front door.

“I've seen way more than I ever wanted or thought I would see,” says Grant's wife Sandy, who worked with Feed The Children (FTC) Canada in Haiti. She says there are experiences from the night of Jan. 12 she'll never forget.

“One of our translators came to me with a limp baby in his arms and said the baby was dead and he had to tell the mother. With tears in his eyes, this 20-year-old Haitian man said “˜I don't know the words to tell her,' as he passed the baby into my arms.”

That same night Sandy wrapped the body of a toddler in a sheet after she died. “I will never forget her beautiful black braids decorated with pink and yellow barrettes. I was in the room alone and I don't know how long I stood there but that image and that feeling will be forever etched in my brain.”

Sandy's job as a liaison between the mission and FTC Canada transformed entirely as she quickly became an unofficial Ontario spokesperson in Haiti, interviewing with national news stations and local newspapers.

“Several people have come from the GTA since the earthquake and will tell us how they saw us on the news, but it's still really hard to imagine,” she says.

Despite the death and destruction, Sandy says she felt moments of inspiration. “The way the entire world pulled together”¦It was inspiring to see the way regular people like you and me are willing to give up time and money to (help) people they don't even know.”

The compound quickly became overwhelmed with medical supplies and food, and a team of paramedics from Halton EMS came to lend their co-worker a hand.

“Our medical capabilities have grown greatly and God has accomplished far more here than I could have imagined last fall.”

The Rumfords will leave Haiti the end of June, and as you read this article will have just made their return to Burlington with a fresh perspective on life.

“One of the biggest lessons we've learned is how overwhelmed we get in Canada with things,” says Sandy. “Watching the Haitian people even before the earthquake, they were happy and content with their lives and thankful for whatever they had.” Grant says there is still a dire need for medical supplies and food in Haiti. “The health care system was a disaster pre-quake and there is still unbelievable need.”

Looking back on his time in Haiti, Grant says he's still overwhelmed by the world's response to the disaster.

“I am so proud of my Halton EMS family. Having them work alongside me in Haiti was the biggest boost I could have received.”

For more information about Haiti's Mission Of Hope, visit ftccanada.ca/moh.