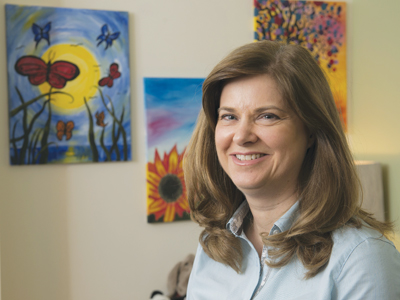 Losing a loved one to suicide is a difficult grief to face. Like a car crash or a fatal heart attack, the deaths are sudden; but the crash and the attack are unintentional deaths.

As deaths go, only suicide has been riddled with criminal and moral implications in the past, as church and state level shame, blame and judgment on the deceased and those loved ones left behind.

Flavia Ceschin and a team of grief supporters are helping erase the stigma attached to death by suicide. (Using the common phrase that includes “commit” denotes a criminality, according to Ceschin.) She founded Heartache2Hope in the fall of 2014 because “there was nothing specific to suicide loss in Halton or Peel at the time.” Previously, the bereaved were directed to the Toronto Distress Centre or grief support centres in Hamilton. “It was an important gap to fill,” adds Ceschin.

Heartache2Hope offers grief support to those in Halton who have been left to wrestle with feelings of confusion, anger, guilt, denial, abandonment and helplessness. “It's a difficult loss and the grief journey after suicide loss is unique from other losses,” says Ceschin.  “It can be very isolating and humans don't grieve well alone.”

For this reason Heartache2Hope offers 12 “closed” sessions, plus two follow-up sessions, to eight grief-struck people in the region who meet weekly to share their feelings and experiences, and to support each other through their grief.
People feel guilt and regret that they couldn't help or didn't see the signs early enough, says Ceschin. “For those grieving death by suicide the intensity of emotions is heightened and the death is sudden so they aren't prepared for it.”

Also, unlike a car crash or heart attack, there's no simple explanation or easy story to explain the death following a suicide.

Since Heartache2Hope's inaugural closed group two years ago, Ceschin and her fellow grief facilitators have since held new sessions each season at the Canadian Mental Health Halton branch office in Oakville (1540 Cornwall Rd, Unit #2). “Open” groups have also been added and are available twice a month on the second and fourth Monday. These groups are for anyone faltering temporarily due to the anniversary of a death, the lost loved one's birthday, or for those waiting for a spot in the closed group.

“That's a lot,” says Ceschin. Multiply that by the six to 10 people affected by these deaths and the numbers of people struggling with this unique kind of grief becomes exponential.

Ceschin hopes talking about suicide and its accompanying grief will lift the shrouds around depression and mental illness that are often precursors to suicide. Practically, Heartache2Hope plans to offer a continuum of care in the future. One-on-one peer support in the early stage of bereavement, and closed and open grief support groups for those ready for group support and for aftercare. She also wants to reach out to the community informing more churches, doctors, police, educators and grief support groups about Heartache2Hope's services. Ceschin is in the process of incorporating and registering the helping agency as a charity and stresses this is currently, and will remain, a no-cost service.

With grief, time does heal, says Ceschin, although the stigma and trauma of suicide may prolong the acute grief period. But it's also what you do with that time that helps the healing. Like a broken arm that has to get set and put in a cast, it's what you do with your grief that makes healing healthier, she adds. “Heartache2Hope's goal is to help the bereaved believe they can lead a happy life, one that's certainly different but can be joyful.”