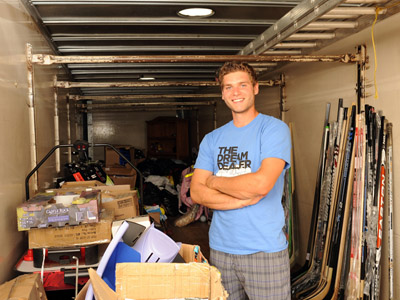 A year ago, Michael Thiessen sold almost everything he owned. That's a daunting task for most, but not for this 24-year-old.

“I had an overwhelming feeling in my heart to get rid of things I've collected over the years and turn them into funds,” explains Thiessen whose charity, The Dream Dealer, reaches out to those physically, emotionally, or financially in need. “At first I wanted to do something international, lend my hands on behalf of those who helped me sell these things.”

Cashing in on anything from his clothing to his computer, the Oakville resident used Facebook and Kijiji to sell his belongings and raised $2,400 that funded his trip to Haiti after the devastating 2010 earthquake.

Working with Adventures in Missions (AIM), Thiessen spent eight days delivering food to the poor and building a church. “Since the community had no school, we offered to teach an English class and the next day we had about 80 children running from all the streets just so they could sit and listen,” he recalls. The Haitian children responded positively, but with one request, “Please come back tomorrow and play with us, for as many days as you can!”

Thiessen comes by his generosity naturally. “Growing up my family opened our house to wonderful people ““ people who had been drug addicts, alcoholics, some from jail, and others were prostitutes,” Thiessen explains. “Over time I got to witness something truly incredible, I saw these people grow. They are the driving force ““ my inspiration behind The Dream Dealer ““ what I've been exposed to in my childhood and what I've seen come from it.”

To spread the word, Thiessen started The Dream Dealer Facebook fan page and posted a video on YouTube about a homeless man he helped on the streets of Toronto. Now there are about five to ten active volunteers and hundreds more donating everything from clothing to furniture, video games, movies and televisions. With more donations than his parents' spare room could accommodate, a 53-foot trailer houses the rest.

Clothing and furniture are given to needy people like the Hamilton man appearing in The Dream Dealer's upcoming video about their mission. “The man featured is physically disabled, has diabetes and was recently diagnosed with cancer. Viewers will be inspired by his story,” says the young philanthropist.

The Dream Dealer touched the hearts of Oakville residents at this summer's Jazz Festival and Midnight Madness raising $400 both nights from t-shirt sales and a raffle offering an Xbox and Sony Play Station 3. The town of Oakville put on a fundraiser at the Glen Abbey Recreation Centre in support of Thiessen's charity, and Mississauga's Winnwell Hockey generously donated four skids of sports equipment for kids who can't afford to play hockey and for fundraising purposes.

Thiessen continues his work abroad. This January, he's making his second trip to Ukraine with Mercy Project International for 12 days where he volunteers as a camp counselor for at-risk children. “I'm in groups of 14 to 17 children and we talk about life and encourage each other. You never know how much you've touched these children's lives,” he admits. “It's about going there and loving these children and it affects them more than they'll know.”

“Since I started The Dream Dealer, people ask if my work has lasting effects,” says Thiessen. “But one thing I've noticed, if you go somewhere and you love whoever you're with – the poor kid in Haiti or the orphan in Ukraine ““ the love lasts longer than I think anything else.”