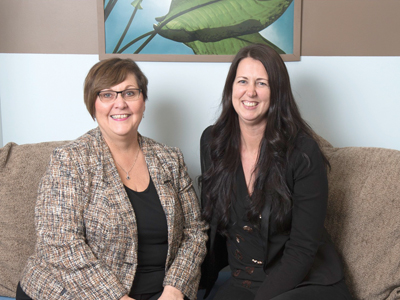 Mental illness is increasingly threatening the lives of our children, with Canada's youth suicide rate the third highest in the industrialized world. Still considered a taboo topic to discuss, only one out of five children who require mental health services receives them.

ROCK (Reach Out Centre for Kids) works hard to lift that stigma while providing mental health services for children and their families in Halton region since 1974.  Located at 471 Pearl Street in Burlington, this accredited children's health centre is soon to be substantially expanded to better serve the needs of their clients, staff and community.

From birth we take our children for physical exams, vaccinations, dental exams, eye checkups. When do we think to take our kids for a mental health check-up?  This is a question that haunts Kirsten Dougherty, ROCK Director of Foundation Operations since 2006. “A child should have the right to immediate mental health services as they would had they broken an arm.”

Bestowed the title Director of People, Culture and Sustainability, Dougherty is dedicated to decreasing the stigma surrounding mental health. “Everyone has a story, a loss or a breakup…it is all mental health.”

In 2014, ROCK was designated Halton's Lead Agency, allowing them permission to expand their current location by a whopping 16,000 sq. ft. With that expansion comes a hefty $6 million budget. Hoping for a December 2018 completion, building plans are ambitious as is fundraising. To date, ROCK has received $2 million from the Ministry, and raised $1 million internally. With $3 million to go and 674 kids on a waiting list for services, internal fundraising is ongoing and corporate and personal contributions are needed and encouraged.

Providing services to an astonishing 15,000 families, the Reach Out Centre for Kids benefits infants and youths up to the age of 17. Services include; general consultation, psychological and diagnostic assessment, group therapy/parenting, intensive child and family therapy, 24-hour crisis response, court assessment, behavioural consultation and intervention, occupational therapy and more.

Expanding facilities will have enormous impact on the centre and the community it serves in countless ways.  Currently, The ROCK Walk-In Therapy Clinic operates to its full potential and extra rooms will facilitate the ever-growing demand for children to be seen by a professional. The residency programme will expand to house more interns, which in turn provides more experts to treat those families in need.

In the past 24 years, Lorri Interisano, Vice President of Operations, has seen ROCK through many a transition. In the beginning, known as the Children's Assessment and Treatment Centre, they merged in 2002 with Halton Adolescent Support Services. In 2006 they were renamed Reach Out Centre for Kids and subsequently, two years later, were joined by The Burlington Family Resource Centre…all resulting in ROCK as it is known today.  Throughout the years and its changes, a constant for Interisano is that early treatment is essential.

“I feel strongly that the earlier we can intervene in a child's life the better outcome they have for later on. I encourage parents to bring their child to our Early Years Program from birth up to six years old. And now to have both the Early Years and Mental Health services in one building is amazing. Families can drop in and establish relationships, ask questions and if necessary receive core service treatment. I have always said, “˜you can put a fence at the top of the cliff before your child falls off or call an ambulance after they fall'.”

Burlington is bound to take pride in the architectural design of the new three-level build. Plans portray a beautiful glass structure that will crown the downtown core.

Kirsten Dougherty likens the building to a beacon of hope. “Visually I believe it will create light, giving the community a sense of where to go. Families who need help will be drawn to it, like in the movie, “˜If you build it, they will come'.”