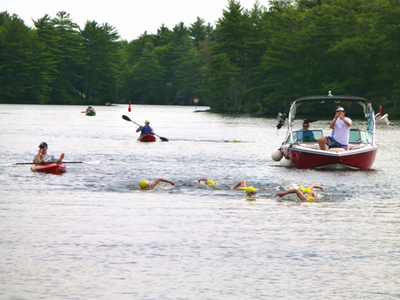 It all started with a lump. Not a lump of her own, but that of someone near and dear to her.

At the age of 10, while running around the yard, Debbie Bang accidentally elbowed her Nana in the chest. The resulting discomfort led to a doctor's appointment with the subsequent and unfortunate diagnosis of breast cancer. A chance collision that prompted an important discovery, it would not be the last time the family had a run-in with the disease.

At 17, Bang found a lump of her own, though it turned out to be just a cyst. Her aunt on the other hand was not so lucky. The second in the family to be diagnosed, her cancer metastasized after seven years moving from breast to brain and bone before it took her life.

Inspired by a friend who had asked her to participate in a swim at Lake Rosseau in support of children suffering with cancer, Bang set out to start her own fundraiser. “As much as we need to support children with cancer it's not as near and dear to my heart as breast cancer,” says Bang. “Because of my history I'm much more at risk than others.”
In 2000 Bang put on her swimming cap and set out on the inaugural Swim for the Cure.

“For that first swim, 14 years ago, I attempted to swim from Swift Rapids to Port Severn which is a 25.6 km swim.” Making it all but 2.5 km from the end, she had to be pulled from the water as her body said enough was enough. “I was just done. I was very disappointed.”

Realizing that this might be too tough for your average swimmer, Bang shortened it to a 12.8 km swim between two locks along the Severn River. This is approximately the same distance it would be to walk along Lakeshore Road from Brant Street in Burlington to Third Line in Oakville. Swimmers can choose to do a solo or relay swim with the option of completing it in full or doing a shortened 7.8 km lap.

“The distance sounds so doable,” says Bang. “By midpoint, our bodies are communicating aches and often leg and toe cramps. By the 9 km point we are asking ourselves “˜whose stupid idea was it to swim this distance?'”

With the help and support of crew members ““ volunteers who paddle alongside the swimmers aiding with direction, food and water breaks and general cheerleading ““ swimmers will gain the strength to finish the swim. “They make sure that they are between us and the boats, that we swim straight”¦ they are our eyes and ears, the feeder, the encourager, and bottom line they put up with our grumpiness. We can't do this without the crew.”

Now, at the age of 54, Bang has completed the 14th annual Swim for the Cure, each year raising more than the last.
This year 23 swimmers took to the Severn River on July 19 helping to raise more than $26,000 to fund breast cancer research through the Barrie Canadian Cancer Society. Since the swim started in 2000, the event has raised more than $208,000 for the cause.

The 12.8 km swim is no easy feat. Bang wakes up every morning to swim using whatever water source is available to her. In the cooler months, you can find her indoors training at either Centennial or White Oaks Pool in Oakville or, once the weather finally warms, in Lake Ontario, Lake Erie, Gulliver's Lake or the Severn River. Bang suggests that those interested in taking part in the swim work their way up to swimming 12.8 km total every week until they are able to swim 6.4 km in two days back to back. “If you can do that,” she says, “you know you're ready.”

If you're looking for inspiration, Bang says it's the message of hope that makes her hop in the water every morning. “I don't have breast cancer, though I know people who do. Their journey with breast cancer is not a pleasant one,” she says. “We cut, we burn and we poison. They're very, very sick and they're not sure whether or not they're going to live. There are some very dramatic things that happen to their bodies”¦ I don't deal with that every day. I can get up, I can swim, and I feel okay to do that. Some days you hurt, but when I finish I'm done. They inspire me to swim.”

If you are interested in participating in the 2015 Swim for the Cure as a solo or relay swimmer, as a crew member, or would like more information, visit swimforthecure.ca