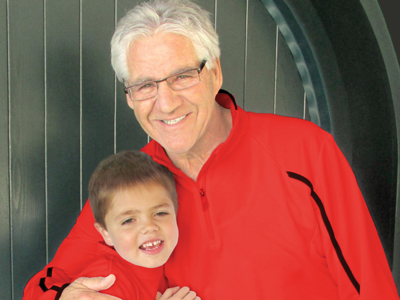 Sometimes life throws you a curveball, other times it doesn't even give you a chance. This is the case with six-year-old Burlington resident Louie Facca. Diagnosed at the age of two-and-a-half with Duchenne Muscular Dystrophy (DMD), Louie has become a statistic.

Worldwide, one in every 3,500 boys is diagnosed with DMD, a progressive genetic disorder that predominantly affects boys and gradually weakens muscles, eventually leading to lung and heart failure. Most affected will be wheelchair bound by the age of 12 with few making it into their mid-20s.

But Louie is also quite fortunate. When diagnosed, his family adopted the mantra “No bad days,” and decided to work towards finding a cure instead of sitting docile and allowing his illness to win. With that Louie's grandfather, Bob Facca, put on his walking shoes to raise money for Jesse's Journey, an organization aimed at creating fundraising projects to help fund research for DMD.

For his first effort in 2012, Facca walked 500 kilometres through Ontario raising an impressive $250,000. Now, at the age of 65, he is doing it again, only this time expanding the walk to 4,000 kilometres from Quebec City to Winnipeg.

Known as Grandpa Bob's 4,000 km Walk for Louie, the walk began May 12 with Facca set to reach his personal finish line on December 8, seven months after his first step.
Walking approximately 20 kilometres a day may seem daunting to some, but for Facca finding motivation is simple. “My motivation is just seeing these kids and wanting to find a cure,” says Facca. “If someone says, “˜Bob, how are your legs? How's this? How's that?' They hurt”¦ but it's nowhere near the hurt that these kids feel. My hurt will go away but theirs will not.”

In order to commit to the walk the 65-year-old business owner had to take a leave of absence with family members taking over while he is on the road.

“You can write a cheque for an organization and say “˜Put it towards the pile,' but by doing the walk we're doing something concrete, we're letting people know that there is a disease out there affecting these kids and we want to find a cure,” says Facca. “I don't have the kind of funding to write a cheque so this is the one other way I could give back to Jesse's Journey and to my grandson and all the other children that have [Duchenne]. It's the only way I know how.”

“Needing to work wasn't going to stop me. If I have to put that on hold and lose what I lose then so be it. If I could sell the business and give the money to someone who could say, “˜Your grandson is going to walk tomorrow,' it would be gone. There would be no hesitation.”

With a large support team, Facca is not alone on his journey. A few volunteers have donated goods and services while others have decided to walk alongside Facca for different parts of the expedition. One such man, Tom Cappelli, whose son Aidan also suffers from DMD, walked with Facca through Quebec aiding as a translator between the two dialects. “I'm just hoping that one day my grandson Louie and Aidan can walk together and do another fundraiser to give back,” says Facca. “To walk together would be an amazing thing.”

Although DMD is a primarily genetic disorder passed from mother to child, approximately 35 per cent of cases occur as a spontaneous mutation. As the most common and severe form of muscular dystrophy, treatment is aimed at the symptoms while doctors remain dedicated to improving muscle and joint function while slowing muscle deterioration. At this time there is no cure.

“When you're dealt a hand, you play it,” says Facca, “and we're going to win.”
To date, Jesse's Journey has raised more than $5 million for the cause with Grandpa Bob's 4,000 km Walk for Louie having raised $477,000 at the time of publication. If you would like to contribute to the North American research projects or volunteer your time, visit jessesjourney.com or text BOB45678.