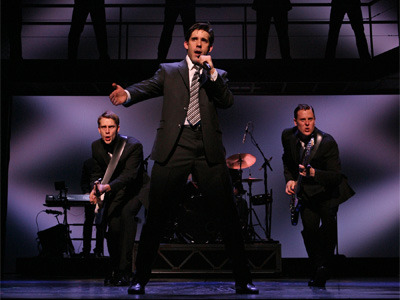 When Frankie Valli was approached with the idea for Jersey Boys, now a smash Broadway hit, what he wanted was the true story, warts and all, documenting the history of one of the most popular singing groups of all times: The Four Seasons. The result is Jersey Boys as we know it today: an incredibly successful musical that explores the rise and stumbles of four boys from New Jersey who could spin memorable harmonies such as “Sherry,” “Big Girls Don't Cry,” “Walk Like a Man” and “My Eyes Adored You” that have stuck in people's heads for years.

In 2006, Jersey Boys swept the Tony Awards rejuvenating a nostalgic interest in a doo-wop decade when male singers wore suits and hit the high notes with ease. The story is classic rags to riches, ultimately a feel good experience laced with a plot that includes conflict, tension, failed marriages, questionable alliances and even time in jail.

Recently, Jersey Boys found new life in theatre venues outside of NYC including the Toronto Centre for the Arts in Toronto. And that's where we'll find Oakville resident Jeff Madden four nights a week, on stage at the Toronto Centre for the Arts playing the legendary Frankie Valli and singing more songs each night than he has in any other production during his 15-year musical theatre career.

Madden grew up in a middle-class Canadian family, attended high school in Etobicoke, married his life-long sweet heart, and lives in Oakville with two young children. In 2009, Madden won a Dora Award for his role in Jersey Boys.

Q: Jersey Boys has been running in New York for years and the Canadian cast has completed more than 400 shows during the last 16 months. How long do you think the show will run?

A: We hope the show will run as long as possible. Right now we are selling tickets until the end of June but that might likely be longer. If we make it until August, it will be two years. Actors are contract workers. With very commercial shows you want them to run as long as they can, and under our contract we are to keep going as long as the show runs. No one [in the cast] wants to leave this show.

Q: It's great to be employed but long run productions have their own challenges. How do you keep up the momentum and enthusiasm while performing the same role, same song and same lines night after night for more than a year?

A: I get asked that a lot. It's a brain defect actors have. Every night is different and with this show the bar is set extremely high. Each night I have to go out and do it the best I can. It's like a roller coaster ride. You get in the car and you take off on a thrill ride and when the ride is over, you realize you made it to the end.

Q: Have you been with the show since it first opened in Toronto?

A: Yes, it's an amazing but demanding role to do. The trick is to stay healthy because I do six out of eight shows a week, with one day off. The challenges are immense because the role requires a high vocal range, endurance and flexibility. Frankie rarely leaves the stage and I sing 26 songs in the show, which is about 20 more than I've ever sung in a show before.

Q: When you auditioned, did you audition for the musical, or specifically the title role?

A: I intended to audition for the main character. My agent and I talked about it and we decided to give it a shot. I had to learn a lot of material to play Frankie and number of challenges emerged such as needing a high vocal range. I knew I had a chance when they kept calling me back and finally I had to audition in front of the man himself, Frankie Valli. He has final approval on all castings in all productions around the world. We've since met two more times.

Q: So Frankie Valli was heavily involved in the development of Jersey Boys and the Toronto production?

A: Absolutely. They [Valli and life-long creative and business partner Bob Gaudio] take the show very seriously and still own all the songs, and to this day have a partnership where they split everything from The Four Seasons 50/50. When the producers approached Valli with the idea for Jersey Boys he said it had to be a true story, nothing over looked. They had to include the group's connections to the mob, friends that turned out to be hardened criminals and time spent in jail. He said they had to tell “our story” and seem authentic so many people would discover a story they probably didn't know.

Q: Jersey Boys has been very successful since it opened on Broadway in 2005, and it's not exactly your grandmother's musical. Characters don't break into song to express their fears and feelings. There's no dance number in the middle of central park. The singing makes sense. Do you think this why it appeals to a wider audience?

A: That's exactly it. Jersey Boys is not a traditional musical. It is a play about a group of guys except these guys happen to be rock stars, so you see them in the studio and in concert. There are many scenes that feel like you're attending a concert rather than a musical. Men really love it. Men are often the ones who first come to theatre kicking and screaming. But once they see the show, many come back a second, third, and sometimes fifth time. This show appeals to people who love musicals and people who love concerts. The audience goes crazy every single night. I've been involved in a lot of shows and I've never experienced anything like it.

Q: You didn't take the traditional route to the stage. At the University of Toronto, you studied science and graduated with a BSc in Human Biology. Isn't that an unusual start for an actor?

A: I was heavily involved in music since I was a kid. I never had trouble performing. But I was also good at science and that's what I went to school to study. I did a lot of extra-curricular productions at university and the more I did, the more I could see myself doing, and then I started to question my career in Human Biology. I decided to pursue a career in theatre. If it's inside of you, it's inside of you.

Q: How did you end up living in Oakville? Is it because of the proximity to both Niagara and Toronto?

A: That's part of it. It doesn't take long to drive to a show in Toronto from Oakville. My wife and I bought a condo after moving here about ten years ago because my wife is from here and her family lives here. I grew up in Etobicoke, so I'm used to being in the area. I like the waterfront, the trees and size of the lots as well as the downtown with a lot of restaurants. We are well situated where we are.

Q: Relatively early in your career, you spent eight seasons at the Shaw Festival in Niagara-on-the-Lake appearing in a number of productions, including musicals. Is musical theatre your forte?

A: I've had more success with musicals mainly because people are more likely to offer me roles in musicals because I can sing. I can sing almost anything reasonably well, so I'm more likely to get those parts of the job accomplished. I love to sing. I've had a lot of good fortune and if you stick around long enough in this business people will know you and the work you've done. But ultimately, you are only as good as your last show.

Q: In 2007, you released your own CD of songs called Taking the Wheel. Do you plan to produce more CDs?

A: I am planning more CDs but that is a large time commitment. The last one took me three months part time and three months full time ““ there's a lot of work to an independent release. I have a lot of irons in the fire as far as that goes but I'm not sure what shape it will take. I can't stress myself, or my voice, out too much right now. I warm up every day for a couple of hours because I can't just show up and do the show.

Q: While you are working on Jersey Boys you must be thinking about what's next. Even if you don't know exactly when the show's run will end, are you planning or pursuing other projects?

A: Right now my energies are focused on Jersey Boys and making it the biggest hit in the city. Not only do people who see the show leave the theatre energized, they want to come back. Often I hear people leaving the theatre saying, “When are we coming back?” You wouldn't believe the number of times some people come to see the show. A large majority of the audience are in their 50s and 60s and remember the era best ““ they know the songs and are the best fans. But many people in their late teens and early 20s are coming to the show as well. We get teenagers up to as old as you can get out. We get a lot of the non-traditional theatre crowd. Jersey Boys is playing all over the world, for a reason.