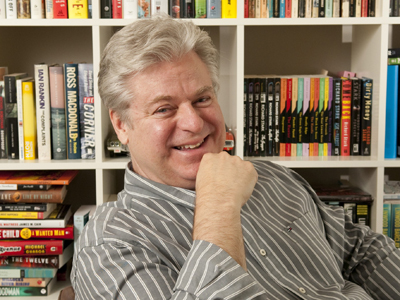 Linwood Barclay laughs as he shows his guests around the beautiful new home he and his wife Neetha bought a year ago in old Oakville. The bathroom we're standing in is smaller than the master ensuite, but it's still larger than the bedroom he had when he was a boy.

“We lived in a mobile home when I was a kid, and my bedroom was smaller than this,” he says, half in wonder. Despite his worldwide success as a writer of mystery novels, Barclay remains modest and affable. He is polite and unaffected in his manner, with none of the trauma or dark eccentricities expected from someone who makes his living writing serious novels with violent plots.

Barclay, 57, has come a long way since working on his parents' resort when he was young. He moved to Canada from the U.S., studied journalism, and got his start as a reporter at the Oakville Journal-Record, where he worked from 1979-81. When the newspaper went out of business, he moved to the Toronto Star, where he worked as an editor in a variety of departments, until becoming a columnist for the paper in 1993, a job he held for 14 years.

He was by all accounts a success in his trade, happily married, the proud father of a son and a daughter, but something was missing. Barclay had entered journalism because of a desire he'd had since boyhood to become a writer of books.

“I'd written three novels by the time I was 25,” he says, “but I kept getting rejection slips.”

Barclay eventually got his big start with his first comic thriller Bad Move, published by Bantam in New York in 2004. He signed to a two-book deal, than agreed to another two-book contract.

“The first four books were not big sellers,” Barclay recalls. “So I decided to change gears.”

Barclay told his editors and publisher he was working on something different, and gave them no details until the book was ready. No Time For Goodbye brought him book deals in the “trifecta” markets ““ the U.S., Britain, and Germany. Barclay was on his way as a best-selling author.

Today, he is a world-acclaimed mystery writer, with no less a fan than horror writer Stephen King. Barclay's many novels sell in the millions, and his latest book, Trust Your Eyes, is a huge success with critics and fans alike.

The book was recently bought by Warner Bros. and director Todd Phillips (The Hangover) will be in charge of the project. Barclay has a position of executive producer, as well.

He admits, even after four non-fiction books and eight novels, his head is still swimming from all the success and the book tours that take him and Neetha around the world.

He delights in showing his visitors a video on his cell phone of a recent book-promotion tour in France. While traveling on a high-speed train through the countryside, the publisher's representative distributed 200 paperback copies of his latest book to passengers, and Barclay obligingly autographed the pages in the train's dining car. He chatted amiably with the passengers who lined up, all the while speeding through France at 200 km/h.

Although Barclay says it was his perseverance that kept him going past the rejections and through the modest success of his first four novels, he acknowledges he couldn't have done it without the love and support of his wife. “I agonized over leaving The Star,” he admits. “I had a steady pay cheque and a dental plan. But around that time, the paper began offering buyouts, so I took one. And Neetha encouraged me.”

Neetha Sands Barclay has retired from teaching kindergarten. She spent much of her career at Clarksdale Public School, and now enjoys her free time and the chance to travel with her husband when his book tours take him overseas.

Their home boasts an expansive kitchen, four bedrooms and a basement with wine cellar, pool table and an entire room for Barclay's electric train set-up. Surprisingly, for a man who writes stories about violence, danger, and antagonists' worst characteristics, Barclay enjoys his toys ““ model cars, trains and models from the favourite TV shows of his youth: Supercar, Fireball XL5 and Voyage to the Bottom of the Sea.

He enjoys cars, too. He and his wife each own their own Porsche ““ his a Cayman and hers a Cayenne. He enjoys the pleasures his success has afforded him, but he hasn't gone overboard.

The couple has lived in various houses in Burlington and Oakville for more than 30 years, and Barclay says the reason is the proximity to Toronto, “but it's not as hectic.”

They like to eat at Jonathan's Restaurant, “and the Sunset Grill on Cornwall street, once a week or so. They have great sausages,” he says. “I like to be able to walk to downtown Oakville, and our favourite restaurant is Cafe Galleria. It's an Italian place and they always have great food.”

In Burlington, among the favourite shops is Joelle's. “Neetha shops there, and my daughter Paige used to work there.” And, as one might guess A Different Drummer Books. “My favourite book store forever,” Barclay says.

“I also love J.C.'s Hot Bagels in the Roseland Plaza and Pane Fresco. They have fabulous bread.”

This year, Neetha will be back with the Drury Lane Theatre Production's latest show, where she volunteers as a make-up assistant, a duty she has performed for 10 years.

Barclay, on the other hand, will finish his book tours, take a break, and then start his next novel, a process that will take about a year. A typical day, when he is writing, involves sitting in his upstairs study, working on the first draft on his computer from 8:30 a.m. till 4 or 5 p.m., which takes about three months. “I normally know how the story is going to end,” he explains, “but I don't know all the details. The opportunities for the characters don't become clear to me until certain parts of the book are done.”

For Barclay, “plotting is the most important part for me to sort out. The characters take care of themselves.”

Does he find any of the characters taking over the story direction as he's writing? “No,” he says with a smile. “I'm the boss.”

Barclay thinks the appeal of his many novels lies in the fact he writes about ordinary people and he explores universal themes. Whatever his approach, it's working. His books are now pub- lished in more than 30 languages worldwide.

Although his portraits on his book covers tend to show a dark, brooding man who explores the most fearsome corners of the human psyche, few would associate that image with the soft-spoken, friendly father of two who takes such delight in working on his model trains.

Even though he is a devilish writer who can keep readers up late at night, turning page after page, this is one book you shouldn't judge by his cover.