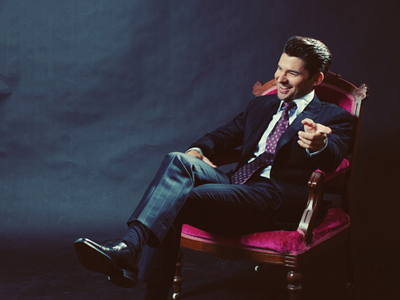 It seems strange to think that, at one point, the Juno Award-nominated crooner was heading down a path that would likely have seen him working with his father Wayne at his corrugated box business.

While it could have been a nice career most people would be happy with, it clearly would have robbed the world of the opportunity to enjoy Dusk's jazz-infused vocals.

A number of years back, the Toronto native had enrolled at York University and was studying economics. However, it quickly became clear to him it wasn't something he was enjoying.

“The study of economics had nothing to do with running a [small] business,” says Dusk.

He was thinking of dropping out but his mother Cora, like most good moms do, encouraged him to stick it out and get his degree. Dusk had been singing at some shows around town and was making decent money doing it so he decided to switch his major to music.

The rest, as they say, is history.

“I figured if I was going to finish my degree, why not do something I love,” he says. “If I didn't have that sense of going for it, I wouldn't be here today.”

These days, he's working on a new album, something fans will be very happy to hear. The goal is to have it ready for release sometime next year.

Sadly, tragedy touched Dusk's life in December when his father passed away. The singer said he was working on a “different type of album” but that all changed when his father died, his passing bringing up a complex cauldron of emotions for Dusk.

“It's not necessarily a sombre record but I feel that the lyrical content has become more real, reflective and powerful. When you put all those emotions together it brings a sincerity [to the music].”

“The event [of losing my dad] made me do a whole 180 on both the musical and spiritual side of things,” he continues.

So far, about five tracks have been laid down and more are coming, but Dusk has made the conscious decision to take his time recording the album. He says, as an artist, the maturation process has made him a bit more of a perfectionist.

“There's no need to rush anything and I don't want to release anything I'm not happy with,” says Dusk. “There's no more throwing stuff out [to make] timelines. I'm not saying the new album is going to take seven years to make but as you get older you want everything you do to be great.”

Dusk embraced jazz at an age before most do, when he was a teen. His mother enjoyed classical and would often listen to a station that catered to her tastes so music was frequently on in the background. However, in the evenings, it would switch over to jazz and the young Dusk was quickly hooked.

“I heard [Frank] Sinatra's voice when I was 17 and I was like “˜What is this? It's awesome,'” says Dusk. “I was a young guy but I was really attracted to it. There's something romantic about jazz. It has a very sexy allure to it.”

Fans of the singer will have a chance to see Dusk live when he performs at the Oakville Centre on September 25. The jazz singer will be joined by classical crossover artist Eleanor McCain for what's billed as a lively night of music.

For the album, Dusk enlisted an 80-piece orchestra and had some guest musicians add their talents to the recording such as Juno Award-winner Guido Basso and vocalist Emilie-Claire Barlow.

“What I wanted to create with this album was a musical tribute to jazz and the music of Chet,” says Dusk. “Part of the fun was getting to work with a number of great Canadian artists.”

He's released a number of other albums including his major label debut Two Shots as well as Back in Town, Good News and Live from Las Vegas.

Dusk moved to Vegas in his early 20s. To many, including Dusk, it seemed like a natural fit.

“It was like a dream come true,” says Dusk. “Growing up I watched Dean Martin and Sinatra videos all the time and they were usually performing somewhere in Vegas. I could tour around the world and then come back to Vegas. Plus, Vegas is the type of town where people come to you.”

While he was there, he had the opportunity to be the in-house singer during the filming of the reality show The Casino.

However, after living the Las Vegas life for a number of years, Dusk felt it was time to come home and moved back to Toronto in 2008.

And, if you've ever seen the naughty but hilarious HBO Canada show Call Me Fitz (starring Jason Priestly), you'll recognize Dusk as the man who sings the show's theme song.