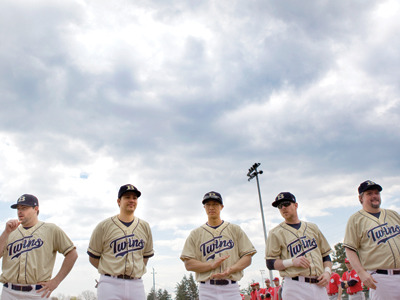 Burlington residents have a new team to cheer for this season.

The Burlington Twins, the newest addition to the 93-year-old Intercounty Baseball League, have moved from Mississauga to make Nelson Park the team's new home.

Roughly 300 people turned out for the home opener in May, and co-owner Scott Robinson wants to see more than 500 showing up for games by the end of the season. Next summer, he's hoping to attract 1,000 fans per game.

Considering the prices ““ free for children under 12, $5 for students and seniors and $7 for everyone else ““ getting the numbers should just be a matter of getting publicity and creating an environment fans want to return to.

Even if Robinson's dream comes true and that many fans do come out to the games, the team isn't so much an investment as it is a passion project for Robinson and his partner, Elliott Kerr, who is president of Landmark Sport Group and co-owner of the Guelph Storm of the Ontario Hockey League.

“We'll never get our money back on this, but it's good for the community,” says Robinson, who is COO of Burlington-based Backspin Marketing Group. “I don't want to sound corny, but it's a giving back thing. The best way I can do that is to take some money and involve sponsors and friends and business associates.”

He's also calling on people in the community to help out as volunteers to make sure the team can thrive in a way it couldn't in Mississauga, where the diamond was in an industrial area apart from the neighbourhoods where potential fans lived. So far, the community has responded, with companies signed on to print the schedules and programs, create the web site, manage the team's social media presence, and produce team apparel for the fans.

Kerr initially bought the team and moved it from Stratford to Mississauga for the start of the 2009 season, and he re-named the team the Twins to celebrate his young twin sons, Kerrin and Jamie. Now in Burlington, the team is hoping to turn the diamond at Nelson Park into a real home where fans can come out to see old-style ball.

One of the tricks was to get the local baseball organization, the Burlington Organized Minor Baseball Association, on board. The BOMBA was kind enough to give up the field on Thursday nights when many of the team's home games are scheduled (the other home games are Saturday afternoons and evenings). In return, the young players of the local teams get a grown-up team, made up in part of local players made good, that they can look up to. The youngsters also get a chance, during a break in every home game, to run the bases with the big team and talk to the older players about what it takes to make a run for the big leagues.

“The players on the team are great,” Robinson says of the guys in the line-up, most of whom play ball for U.S college teams and sign up to stay in shape over the summer. “They're not jaded by the million dollar contracts and sponsorship deals, so if [kids] ask a question of the players, the players talk to them.”

Robinson also hopes to give back to the local baseball association by building covered dugouts for the teams and refurbishing the bleachers for the fans.

Getting a good product on the field is also a necessity. In the eight-team league, the Twins came in sixth last year. They're hoping to improve on their 17-19 record this season while building fresh rivalries with nearby teams.

The Intercounty Baseball League (IBL), which also has teams in Toronto, Hamilton, Ottawa, Brantford, Kitchener, Barrie and London, has been around since 1919. It was while with the Toronto Maple Leafs, at the time part of the International League, that Babe Ruth hit his first ever home run as a professional baseball player.

The IBL is considered a feeder league for the majors, with many of the college players eventually being drafted and playing for the big clubs. There are also some veterans of the majors who stop by on their way out of the pros to play some fun summer ball.

The 36-game season runs from May to August, and the boys in blue and gold are on their home diamond at Nelson Park for 17 of those.

It's a much simpler league than the one that gets all the press, and that's the true charm of the IBL, according to Robinson. It's baseball before the jumbotrons and T-shirt cannons, and before $11 beers and steroid scandals. It's a purer version of the game, which is exactly what Robinson wants to bring to Burlington.

He wanted to give the city's kids a chance to see live games featuring great young players and give them a reason to separate themselves from their Xboxes and Playstations, get outside and experience the magic of baseball first hand.

“It's taking us back to yesteryear,” he says. “It takes me back to my childhood and how my dad taught us to throw the ball around and how much fun we had with that.”

He adds, “I really encourage people to come out. You're outside watching a little ball, chatting with your neighbours and having a good time. I want the stands to be full and I want the players to have fun and the fans to have fun.”

For more information on the team and its schedule, visit burlingtontwins.com.