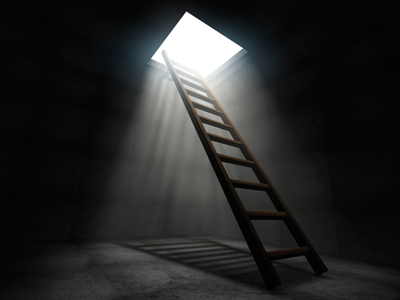 The door closes tightly and the last rays of light are sealed from view. A hush falls over the room, and then a flashlight clicks on. This is the start of one of the latest trends in entertainment: the escape room. Escape rooms have quickly become a recreational trend for simply spending time with family and friends or, as team building with co-workers. Whatever your reason for booking the experience, escape rooms help you flex your mental muscles by solving a series of puzzles while working with others to unlock that door to freedom.

Exit Strategy
Multi-levelled escapes ensure that everyone can get involved while inventive clues will keep you on your toes. At Exit Strategy, there are three themed rooms: Prison Break, Jewel Thief Mystery and Tiki Curse. Both Prison Break and Jewel Thief are meant for two to six players, feature a three-star difficulty rating (out of five) and provide players with 45 minutes to complete the puzzle at a cost of $23+hst per person. Tiki Curse features a five-star difficulty rating and requires three to five players to complete with players being provided with 60 minutes of time at a cost of $25+hst per person.
1233 Northside Road, Burlington
289.925.2259
exitstrategycanada.ca

Narrow Escape
Narrow Escape has two rooms currently open to escapees, each at a cost of $25+hst per person. Claustrophobia is best for teams of two to three people with an easy to moderate difficulty level, while the Baker Street Mystery can be played by two to eight people (though four to six are recommended) and features a hard difficulty level. Coming soon to Narrow Escape is the Zombie Apocalypse which features a hard difficulty level and can be played by four to ten people at a cost of $28+hst per person. The Gauntlet takes on a rapid fire approach with ten puzzles to be completed within ten minutes and the fastest person to complete the puzzle wins a free game.
2526 Speers Road, Unit 4-9, Oakville
905.825.8009
narrowescape.ca

Pani.Q.
At Pani.Q. groups are given 45 minutes to complete the puzzles needed to escape, regardless of which of the three rooms they choose. The Dark Room is their easiest escape with a 25 per cent success rate and a “Part 2″ version of the room on its way. The Ward features a moderate difficulty level with a 15 per cent success rate while The Hydro Dam is the hardest room with a success rate of just 10 per cent. All rooms are $25 per person with discount rates of 10 per cent for groups of six or more and 20 per cent for groups of 12 or more. Every Tuesday, Pani.Q.-goers should take advantage of the “Two's Date Tuesdays” buy one get one half
off discount.
1065 Canadian Place, Unit 132, Mississauga
289.521.LOCK (5625)
paniq.ca

Alcatraz Escape Room
Owned and operated by three local puzzle enthusiasts, Alcatraz Escape Room is sure to get those mental cogs turning. Teams of two to six players have 50 minutes to complete a series of puzzles, riddles and mysteries in order to escape one of the two themed rooms: Alcatraz or Casino Heist. Rates are $20 per person if booked the same day, $27 per person for groups of two, $25 per person for three to four people and $23 per person for five to six people. Corporate Team Building experiences are available and feature food from local restaurants, special pricing and unique options available exclusively for company team building.
576 Concession Street, Hamilton
289.775.4091
alcatrazescaperooms.com