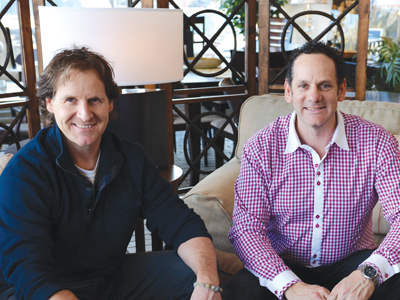 While shopping for furniture in the late 90s, Jim Hobbs, co-owner of Joshua Creek Furniture, noticed a gap. “I could not find a single store that could appeal to me in quality or price.”

Most would settle for less and purchase the overpriced, high quality sofa if they could afford to do so, or accept the fact that their $400 couch might not stand the test of time, but not Hobbs. In 1998 he set up shop on Trafalgar Road in Oakville, determined to make a name for himself.

Utilizing techniques acquired during his direct marketing days, Hobbs set out on a mission. “I actually went door-to-door,” he says. “I walked all the way down the service road and I handed out flyers.”

It wasn't until 2001 that Joe Levine came on board after selling his retail communication business. “I came in [to the store] and sat around and hung out here. It was different than everyone else and I realized I couldn't work at those other places,” says Levine, “but there was something different here.”

The two met in the third grade and maintained their friendship into adulthood. Due to this, Hobbs knew they would make a great team. “We both have similar core values, the number one being family,” says Hobbs. “I could say that then, I can say that now, and I'll probably say it in the future.”

Initially working under the guidance of Hobbs, Levine eventually became a 50/50 partner in 2005. The pair largely contribute the store's 15 years of success to their loyal customer base. “It's a great community to have a business in and people will really support you as long as you run a good business and take care of them,” says Levine.

“We really appreciate all the support that our local customers have given us, and the loyalty”¦ it doesn't go unnoticed. It really just made this business that much more pleasurable to run,” adds Hobbs. “That's one of the reasons we're still in it ““ we've met so many wonderful people over the years.”

Offering an extensive variety of quality leather and upholstery sofas, solid wood TV cabinets and entertainment units and dining, coffee and side tables, all almost entirely Canadian made, widely customizable and at affordable prices is another major variable in the store's success. “We choose transitional styles that aren't just popular for today, but for the long term,” says Levine. “We're not trying to find the cheapest pieces, we're trying to find the best quality and give them at a fair price.”

Hobbs notes that investing in the store's faí§ade isn't what keeps customers coming. “[The store] is essentially a 100,000 sq-ft warehouse. We invest the money and the look into our product, and our customers get that.”

“We've hit a stride and we're very happy with where we're at right now.”