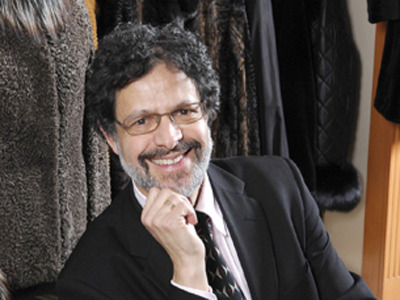 Fur is in the Livingston genes. With a family history in the fur trade, it seemed inevitable that one day Alan Livingston would take over Livingston Furs Ltd. The store, which provides a warm and welcoming atmosphere to shop for all things fur, relocated to its present location in downtown Burlington in 1999.

This year marks the 100th anniversary of the boutique Warner W. Howell first opened in downtown Hamilton. Livingston's grandfather, a Toronto fur manufacturer and designer, purchased the store in 1948 and appointed his son-in-law, Jordan Livingston, to run the business. Jordan had previously learned about the business, through his own father Alfred Livingston, who also worked in the fur industry.

In the late 1970s Livingston, a teacher with a Masters of Education, had an opportunity to try out the family business and eventually took over from his father in the mid-1990s. “I found it to be much more interesting than I ever
realized, with so much variety and a lot of great craftspeople in the trade,” he says. “It's labour and design intensive.”

In the early days, fashionable items included fur blankets for sleighs and men's fur coats, which were popular to wear to football games in the 1920s. Nowadays, they have diversified and sell coats in shearling, cloth, angora, leather, and more. Accessories such as scarves, gloves, hats, purses, knitted fur jackets and capes with fur trim are favourites. They also perform repairs, alterations and custom remodeling of old coats at their factory located in Effort Square in downtown Hamilton. There, customers return year after year to store their coats in two large, state-of-the-art cold storage vaults. Clients can also trade in older fur coats, which are then recycled.

They have a mixture of the au courant and unique and more traditional pieces. “We are not just a traditional fur business and furs don't look like they used too. They don't look like your grandmother's coat,” he notes. “We have customers in their 20s right up to those in their 90s. Sometimes, we get coats that we think are terrific for the really young crowd and somebody in their 80s will come in and grab it.”

In addition to their own distinctive designs, they carry designer labels including Bill Blass and Louis Feraud. Alan's wife Ya'el works closely with him to select new styles and designs. Together, they dissect the latest trends, discuss ideas and attend international trade shows such as the North American Fur and Fashion Exhibition in Montreal.
Livingston also sits on the executive for the Retail Fur Council of Canada, of which his father was the founding president.

He reflects on how Livingston Furs Ltd. has reached the milestone of celebrating 100 years. “My father built up a really wonderful reputation over many decades in the Hamilton/Burlington area and we've continued the tradition of personal service, attention to detail and very, very fine design, quality and craftsmanship,” he says. “It's a labour of love and we have a lot of long time customers who are very loyal. It feels good to be able to make people happy with a really, beautiful and lasting item.”