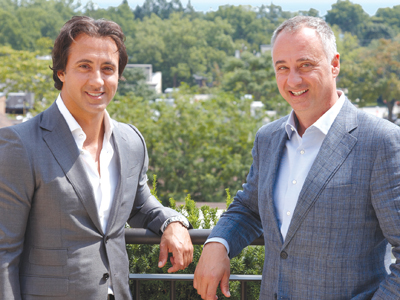 Great things come from small beginnings, just ask Marco Guglietti, President of Rosehaven Homes. Launched in 1992 after Giovanni Guglietti purchasd 20 lots in Waterdown for his sons Marco and Silvio, the company has grown to be more than just a builder of homes, but a builder of communities as well.

The winner of almost two dozen awards through numerous Home Builder's Associations, Rosehaven has designed, built and sold more than 4,000 homes across Southern Ontario and the GTA. An extreme attention to details, the use of quality materials, a hands-on customer service approach and a desire to create not just houses, but rather homes, is the foundation of the company.

As a tight-knit family themselves, the Guglietti's were raised with a strong set of values and a dedication to giving back.

“My mother passed away from cervical cancer in 2005,” said Marco Guglietti. “What really triggered us to give back was our mom's diagnosis”¦ So many people are affected by cancer so we decided to donate to research.”

Another way the family raises funds for cancer research, specifically gynecologic, for the PMHF is through their fashion show Most Wanted. Running every May, the fashion show was initially started in Concetta's memory but has grown into something more.

“The fashion show is in honour of all women, past and present,” says Marco, noting that this year's show raised approximately $300,000 for Princess Margaret's cancer research and care.

Whether it be fundraising for Habitat for Humanity or donating money to the new Oakville Hospital Foundation ($250,000 to be exact), the Guglietti's and Rosehaven know that what matters most is a strong community.

When we spoke, Marco had just returned from Bologna, Italy where he and 60 other Toronto-cyclists took part in the 2012 Granfondo Italia, where they raised more than $600,000 collectively for the Humber River Regional Hospital Foundation.

Other charitable efforts include donations to the Halton Women's Shelter and Sick Kids Hospital, the participation in and donation of funds from the Oakville Santa Claus Parade to Kerr Street Ministries, and a land donation to the Oakville-based Kids Culinary Community to grow a garden.

Rosehaven even finds ways to donate through home sales. In order to gain input to better their personal services and to raise funds at the same time, Rosehaven provides each new homeowner with a customer satisfaction survey. Upon the completion of a survey, Rosehaven donates $20 to Habitat for Humanity.