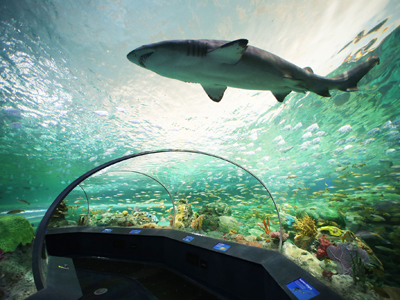 Experience aquatic life like never before at the newly opened Ripley's Aquarium of Canada in Toronto. The 12,500 sq-ft interactive attraction contains more than 5.7 million litres of water showcasing more than 16,000 marine animals and 450 different species. Among the awe-inspiring attractions are the 420,000 litre Rainbow Reef tank with 60 varieties of colourful species from the Caribbean and Indo-Pacific regions, Ray Bay where dozens of rays swim across a large viewing area and to the surface of the interactive touch pool, Discovery Centre with tsunami simulator, horseshoe crab touch pools and Shark Reef crawl tunnel. The Dangerous Lagoon, a football field length glass viewing tunnel with glide-path sidewalk, allows you to view sharks, green sea turtles, sawfish and moray eels in a jaw-dropping display. The Aquarium strictly adheres to the standards of animal welfare, veterinary care, wildlife conservation, scientific research, education, staffing and safety as regulated by the Association of Zoos and Aquariums (AZA) and the Canadian Association of Zoos and Aquariums (CAZA). The highly experienced animal husbandry team of more than 20 marine biologists and aquarists is so proud in fact, that the Aquarium even allows a revolutionary behind the scenes look at the Life Support System for two of the Aquariums' largest tanks. Open 365 days a year.
ripleysaquariumofcanada.com