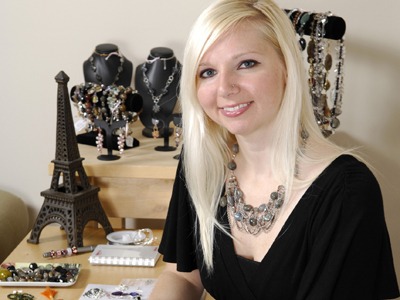 A tour through the couturier House of Lesage that aired on an episode of the maven of all things homespun, Martha Stewart's show last year, sent Sarah Cownley to Paris, with no more than high school French to communicate with, no place to live, nor any familiar face to help her get settled.

Before the 31-year-old embarked on her Parisian adventure in September 2009, she worked three jobs to raise the $8,300 tuition for the three-month long professional training course at the prestigious embroidery atelier (studio).

“Anything creative I follow. I'm a constant learner,” says Cownley, who is in Burlington now but plans to go back to Paris in the new year.

By the end of her six-month stay, Cownley invested more than 450 hours into the course and in the process, created a stunning collage of all of her lessons that is worthy of becoming an heirloom.

As a House of Lesage graduate, she is one of an ever-diminishing group of artisans capable of “¨creating wearable art, of stitching gossamer canvases replete with tiny cut glass beads, sequins and rhinestones. Owned by Chanel, the skilled craftspeople at the House of Lesage are currently responsible for 85 per cent of all the beading and embroidery that graces the world's famous couture collections including, Chanel, Christian Dior, and Lanvin.

For Cownley, her newly acquired embroidery skills will now be incorporated into the jewelry she designs and makes by hand for her own well-established label, Glimpse Beads. She plans to create cuff bracelets and collar necklaces on vintage silks that are covered with the intricate bead and embroidery work she now knows how to do.

After that, to hone her jewelry-making skills she relocated to Chicago to learn silversmithing and earned her level 1 certificate in precious metalwork.

And when Cownley returns to Paris the learning will continue. She plans to begin an apprenticeship at either the 130-year-old artificial flower-making house called Legeron, or learn feather and accessory design at Le Maison Lemarie, which was also established in 1880.  Both working atelier houses create pieces for clients such as Dior, Chanel and Givenchy.

As well as meeting her new love in France during her time there, Cownley also connected with a bevy of vital contacts in the fashion world.

Among them was Daily Telegraph fashion journalist Hillary Alexander. While circulating outside Paris' fall/winter fashion week venues Cownley revved up her courage and introduced herself to the influential reporter, asking her if she would wear one of her necklaces “” a chunky amethyst piece with draping chains.

“I hope to see (Alexander) wearing it one day.”

In the meantime, Cownley has registered her company in France where she will develop her web-based business for Glimpse Beads, continue doing sample work for a Canadian handbag company, and teaching jewelry-making at craft centres, design schools and home parties, as she did in this part of the world.

Ultimately, she hopes to one day open her own boutique in Paris.