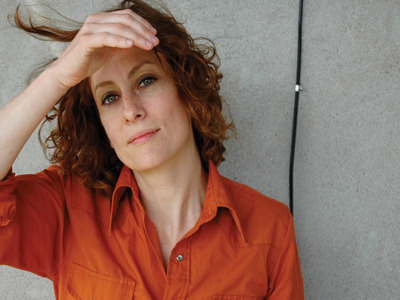 For singer and songwriter Sarah Harmer, who grew up on a North Burlington farm near Mount Nemo conservation area on the edge of the Niagara Escarpment, there's no place like home.
Today, home is Kingston, Ontario, but her heart remains in Burlington where her parents still live and farm. After the release of her album, I Am A Mountain, five years ago, her music career took a turn into social activism when she was called to spearhead a grassroots environmental effort to protect part of the ecologically sensitive Niagara Escarpment from the blast of the quarry industry. She established Protecting Escarpment Rural Land (PERL) in 2005, learned to lobby in the political (and legal) arena, joined forces with three tiers of government supporting her position and has become a quasi expert on the Niagara Escarpment's official conservation plan first penned in the late 1970s.
During this time, she also wrote nine of the ten songs for a new album and recorded, produced and released her latest musical masterpiece called Oh Little Fire, a heartfelt earthy lyrical but instrumentally-driven album gaining critical praise from almost every music writer with a CD player and a publishing outlet. Her goal for this release was to create a rich sound that invited cranking up the volume a few notches, a deviation from her previous softer bluegrass-folk style.
The 39-year old musician started her career in the 1990s with the Kingston-based indie band Weeping Tile, then crashed the solo scene in 2000 with the album You Were Here, and hit single “Basement Apartment.” She hopes the song “Captive” from this 2010 release will follow that success. If you can relate to lost love and the mysteries of human relationships, then this is one CD you'll want to turn up.

WEST: Considering you grew up in Burlington, have watched the city expand during recent decades and return to the area both to visit and perform as often as possible, what do you think are the advantages to living here?

HARMER: Burlington at one point was considered Canada's garden. The natural climate and soil was considered as high grade as it gets and it was important as a fertile area for food. When you take a boat trip from the Hamilton Harbour to the middle of Lake Ontario and look back you can see Mount Nemo in the centre of it and you understand why people are working hard to protect the natural landscape. It's part of why people like the city of Burlington, because you can go to the Bruce Trail or conservation area easily. We need to prioritize and protect things that we can't manufacture. It's important for people's souls. The lakefront is an important part of that too.
[Mayor] Cam Jackson has been good about protecting Mount Nemo as a retreat and recognizes that we need an intact ecosystem for clean air and clean water. I was sad to see developers go North of Highway #5. My parent's farm is on #1 Side Road where I grew up. It's still there and is a functioning farm producing hay and feed crops.

WEST: Many writers are noting that your fans have been waiting five years for a new album from you. Considering you write your own songs, is five years really a long time? After all, if a novelist writes a book every five years, they are considered prolific.

HARMER: I like the way you think. On big commercial records, there are a lot of contributors and producers involved and not all songs are written by one person. When you have teams of people you can put out an album in a year or a year-and-a-half. But I write my own material, and you can't rush a song. I've been asked to write a song on occasion for someone else, such as the CBC, and I hate to come up with something by deadline. It's a different process, though sometimes it is nice to have a boss.

WEST: In an interview published in The Toronto Star, you claim to loll around a lot and don't feel guilty about it. That's refreshing to hear from an accomplished person, especially in our society that encourages non-stop work ethic. Is it true?

HARMER: I'm glad they printed that, and for the most part, yes. I don't set deadlines. I sometimes slow down deliberately. Life is a beautiful thing. There's so much beauty, so much pain, so much to experience that I don't want to be dull to experiencing all that. But sometimes I can feel guilty about it too, especially when I compare myself to other people. I watch the musical careers of friends and see how much they are doing and feel pangs of guilt for not being more motivated.

WEST: You seem to have a strong connection to nature. For you, are remote natural settings the most inspirational places to write songs?
HARMER: I write songs on the road, at home, anywhere they come. Years ago when I spent time on Salt Spring Island I was sitting on the dock with a beautiful view by a beautiful lake and I thought, “Ok, start writing,” and nothing came. Then I will be back home or on a bus on the road and the songs start to come. There is some amount of intention to pull things out of yourself, but you don't always know when it will happen.

WEST: Your latest album, Oh Little Fire, has an over-riding theme of love found and lost to it. There seems to be that introspective, almost sad connection linking many of these songs even though some are more musically upbeat than traditional folk.
HARMER: I think this album is about hope, potential and possibility. There is some sad stuff, but I tried to have some balance and yes, some songs are tough to perform actually. But I didn't want the record to be mired in self pity. I want it to be carefree and an escape. Musically, there's a lot of stuff to get whisked away on… When I was making the album and writing the songs, they existed as much in my mind as my heart, so I had more insight into them and could articulate more what they were about.

WEST: Promotional material and music critics are calling this CD more rock or pop than your previous work. Do you consider this album pop music?

HARMER: Pop music is catchy and gets its way into your mind. Eventually, you hum along with it after a certain time. There is a lot of narration on these songs too. So I hope this album is a hybrid of these things. I don't mind the label “pop music” at all. Pop music does mean popular.

WEST: As the founder of PERL, you have been active in protecting parts of the Niagara Escarpment near your family farm after there was an application to rezone the area for use as a quarry. That proposal has been rejected and all three levels of government are against the project. It's unusual that an environmental organization like yours is sitting on the same side of the table as the government on an issue. Yet the case is still alive. Where does it now stand?

HARMER: A hearing, which is the legal right of the company, is scheduled to begin at the end of October. That's going to cost tax payers millions and millions of dollars because this company speculated on land to try to rezone it and couldn't. Now they are pushing it to a hearing where PERL and the city and region are all saying the same thing. It's been five years in the making, reviewing the application. It's now been rejected and tax payers will be on the hook to pay for all these government experts and agencies to say the same thing over the next 12 months.
So we [PERL] are calling on the province to listen to the science and properly map this land on Mount Nemo as it should be properly mapped in the Niagara Escarpment Plan. Right now it's considered “Escarpment Rural.” But, because we've got wetlands and species-at-risk habitat there, that land designation needs to be updated to “Escarpment Natural” which is part of the designations within the Niagara Escarpment Plan. If it were properly updated, we wouldn't be contemplating aggregate extraction here.