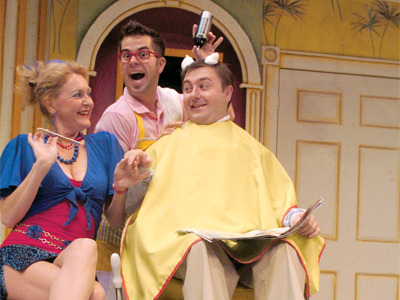 Summer starts with a bang when one of the most recognizable and popular musicians of all-time comes to Copps Coliseum for a concert in July.

That's right, Sir Elton John is coming to Steeltown for a concert on July 10. With a career that's spanned four decades, John has sold more than 250 million records worldwide. He's had a list of hits that include “Saturday Night's Alright for Fighting,” “The Bitch is Back,” “Don't Go Breaking My Heart,” “I Guess That's Why They Call It The Blues” and “Can You Feel The Love Tonight,” among others. And, who can forget his memorable song “Candle in the Wind,” which is the top-selling single in history with more than 37 million copies sold. Throw in the fact he's won five Grammy Awards, an Academy Award, a Golden Globe Award, a Tony Award and is a member of the Rock and Roll Hall of Fame and there's really not much more to say about the man. Tickets cost $81.50 to $165.50 and can be purchased through Ticketmaster.

Fans of the Dark Side won't want to miss the Star Wars In Concert show that takes place at Copps Coliseum on July 24. The music from the films, composed mostly by John Williams, is in a word, magical. It's so iconic most people will instantly know what song they're hearing after just a couple of notes. At the show music from the films will be performed by a live orchestra while a video montage accompanies each song. As an added bonus, a collection of props and costumes from all six films are being brought on tour as part of a travelling exhibition. Two shows will be presented on July 24. Tickets cost $35.25 to $89.75 and can be purchased through Ticketmaster.

At Stage West in Mississauga, the whodunit Shear Madness continues until September 19. The show is set in a hair salon and things turn dark when a woman who lives above the shop is murdered. The play is full of audience participation as they get to listen to what's happening on stage, question the characters and then decide who they believe to be the guilty party. For a list of dates and ticket prices, visit stagewest.com or call 905.238.0042.

South Korean all-female group Wonder Girls are coming to Canada as part of a North American tour that makes a stop on July 12 at the Living Arts Centre in Mississauga. It's part of the 28-city Wonder Girls World Tour that wraps up in Orlando. Last summer, the girls had a chance to tour with the Jonas Brothers and also had a sold-out show with Justin Bieber at the Hollywood Palladium on Valentine's Day. Tickets start at $25 and can be purchased by calling 905.306.6000.

Burlington residents that enjoy challenging and unconventional theatre can swing by the Burlington Student Theatre on July 16 and 17 to check out The Flounder Festival. It's billed as Burlington's answer to the Toronto Fringe Festival and will feature artists of all disciplines dancing, singing and acting. The festival celebrates its tenth anniversary this year.

Tottering Biped Theatre in Burlington will present the drama My Name is Rachel Corrie, July 22 to 25. The play explores the writings and thoughts of the young peace activist from Olympia, Washington who was killed in 2003 after being struck by a bulldozer while in Rafah, Gaza. According to the website rachelswords.org, Corrie was attempting to stop the destruction of a Palestinian home when she was run over by an Israeli military bulldozer. A prolific writer, Corrie left behind a series of diaries and emails that were crafted into the play by British journalist Katherine Viner and actor Alan Rickman. The performance will take place at the Burlington Student Theatre. Tickets cost $15 to $20. To purchase visit totteringbiped.ca.

It's going to be a busy summer at the Rose Theatre in Brampton, with plays running all season. The comedy 7 Stories by Morris Panych runs at the theatre until July 31. Directed by Robert Woodcock, the show is about a person standing on a ledge, ready to jump and end it all, but keeps getting interrupted. Tickets cost $25. To purchase, call the box office at 905.874.2800.

The shows continue with the musical Broadway Gold II, which runs July 23 to 31. The musical revue, directed by Danny Harvey with choreography by M.J. Shaw, covers the music of some of the biggest musical of all time, including Carousel, Hair and Grease. Tickets cost $30.

Also on stage is You'll Get Used To It! The War Show. The musical by Peter Colley with direction by Danny Harvey follows six men who enlist for the World War II seeking glory and honour but get a lot more than they bargained for. It runs August 6 to 28. Tickets cost $25.

The theatre will also present the comedy The Odd Couple. The comedy follows slovenly Oscar and tidy Felix as they try and share an apartment. The Tony Award-winning play runs August 20 to 28. Tickets cost $30.