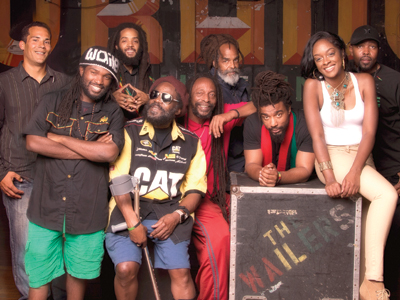 One of the hardest rocking and most venerable metal acts to ever grace the stage is nearing the end, so fans of Black Sabbath won't want to miss the band when they make a stop at the FirstOntario Centre in Hamilton for a concert on February 21. Black Sabbath, which features original members Ozzy Osbourne, Tony Iommi and Geezer Butler, are embarking on a tour that's ominously titled The End and is being billed as the band's last ever. So, if you want to hear “War Pigs” or “Iron Man” or “Paranoid” performed live by the guys who made them so iconic, this appears to be your last chance. Black Sabbath will be joined by special guests Rival Sons at the Hamilton concert. Two years ago, the band released the studio album 13 after a lengthy sabbatical considering their previous studio album was 1995's Forbidden. Tickets cost $49.50 to $150 and can be purchased through Ticketmaster.

Meanwhile, a concert at Hamilton Place on February 25 is sure to boldly go where no man has gone before. Well, musically that is. Star Trek: The Ultimate Voyage Concert Tour is making a stop in Hamilton and is sure to delight fans of the popular movie and television franchise. A live symphony orchestra will cover some of the greatest Star Trek music of all time while footage is shown simultaneously on a 40-foot wide screen. There will be music from the original television series as well as later incarnations such as The Next Generation and Deep Space Nine as well as the films. Tickets cost $62.50 to $95 and can be purchased through Ticketmaster.

The Wailers is a band that rose to fame with one of the most iconic musicians of all time, Bob Marley, and they're coming to the Oakville Centre for a concert on February 25. The band formed in 1969 and its original lineup included massive stars Bob Marley and Peter Tosh. Meanwhile, long-time member Aston  “Family Man” Barrett heads up the band these days. If you love reggae, you won't want to miss this concert. Tickets cost $63 to $74 and can be purchased by calling the box office at 905.815.2021.

All you have to do is listen to Steven Wright and his deadpan delivery and you will surely be in stitches. Known for his laidback style and witty observations that tickle the funny bone, the comedian is coming to the Burlington Performing Arts Centre for a show on February 19. He started making a name for himself with his 1985 comedy album, I Have a Pony, which earned a Grammy Award nomination. In 2007, he released its follow up, I Still Have a Pony, and that also earned a Grammy nomination for Best Comedy Album. He's appeared in films including Canadian Bacon and Reservoir Dogs (as the voice of the deejay) and is regular on many of the late night talk shows. Tickets cost $62.10 to $69 and can be purchased by calling the box office at 905.681.6000.

At some point in your life, you have likely heard someone yell “Zeppelin rules!” And, you know what? They sure do. Hear it for yourself when Classic Albums Live presents Led Zeppelin II at the Milton Centre for the Arts on February 12. It's a hell of an album with fantastic singles like “Whole Lotta Love”, “Ramble On” and “Heartbreaker” and you will have a chance to hear it performed live by a collection of talented musicians. Tickets cost $48 to $52 and can be purchased by calling the box office at 906.878.6000.

Those looking for something a little different to do this Valentine's Day can check out the A Broadway Valentine show happening on February 13 at the Living Arts Centre. The two-act production tells the story of a married couple's life using Broadway love songs from popular shows including West Side Story, Fiddler on the Roof and Phantom of the Opera, just to name a few, as well as parody and comedy. It stars lyric soprano Janet Martin and tenor Philp Douglas Kerr. Tickets cost $30 to $45 and can be purchased by calling 905.306.6000.

It's going to be a racy night at the Brampton Rose Theatre when the Burlesque To Broadway show starring Quinn Lemley comes for a performance on February 20. Lemley will be joined by her backup “divas” along with a live band to present an evening of provocative and alluring dance. The production will include vaudeville humour along with songs such as “Hey Big Spender”, “Ten Cents a Dance” and “Let Me Entertain You.” Tickets cost $75 to $89 and can be purchased by calling the box office at 905.874.2800.