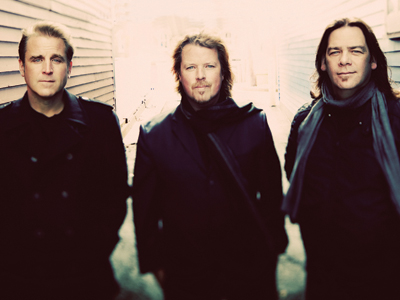 The Price is Right Live will be coming to Hamilton Place on March 22. Some of the lucky few in the audience will be brought up on stage for a chance to win a variety of prizes, from appliances to vacations and new cars, by playing some of the television show's most popular games such as Plinko, Cliffhangers and, of course, the Big Wheel. Todd Newton hosts. Tickets cost $48.75 to $69.25 and can be purchased through Ticketmaster. If you want to play, you have to be at least 19 years of age.

Popular Celtic-inspired band Great Big Sea comes to Hamilton Place for a concert on April 10. Making the show even more special is the fact it comes as part of the band's 20th anniversary. The band ““ Alan Doyle, Sean McCann and Bob Hallett ““ is touring in support of its first greatest hits and boxed set: XX. Great Big Sea first hit platinum status in sales with their second album Up. However, the big breakthrough came in 1997 when the band released Play, which reached platinum in three months and featured the hit singles “Ordinary Day” and “The Night Pat Murphy Died.” Other notable songs from the band include “Mari Mac” and “Sea Of No Cares.” Tickets cost $74 to $99.50 and can be purchased through Ticketmaster.

Those who love to laugh won't want to miss comedian Jerry Seinfeld when he comes to Hamilton Place on May 29. The sitcom Seinfeld ran for almost a decade and featured the comic playing a semi-fictional version of himself who was joined by his buddies Elaine, Kramer and George. Tickets cost $92 to $112 through Ticketmaster.

The laughs will continue at the Oakville Centre for the Performing Arts when comedians from the popular Just for Laughs comedy festival in Montreal take the stage on April 11. The performance will see the comics riffing on a variety of topics sure to leave the crowd in stitches. Tickets cost $53.99 to $64.99 and can be purchased by calling the box office at 905.815.2021.

Those who love R&B won't want to miss Boyz II Men when they come to Oakville for an April 12 concert. The four-time Grammy Award winners have sold more than 40 million albums worldwide and are touring in support of their latest album Twenty. The band's had some big hits throughout their career, including “End of the Road” and “I'll Make Love to You.” Tickets cost $92.99 through the box office.

At the Burlington Performing Arts Centre, Nova Scotia fiddler Natalie MacMaster comes to town for a concert on April 25. She's sure to have everyone tapping their toes to her East Coast sound and the musician is touring in support of her latest album Cape Breton Girl. She has earned a number of East Coast Music Awards and Juno Awards while her 2000 album My Roots Are Showing, was nominated for a Grammy Award. Tickets cost $58 and can be purchased by calling the box office at 905.681.6000.

At the Milton Centre for the Arts, Dave, Morley and the rest of the gang from CBC Radio program The Vinyl Cafe, roll into the centre for a performance on May 13. Stuart McLean serves as the show's host and it revolves around tales of Dave's family and features music from Canadian artists, woven in-between the stories. Tickets cost $32.50 to $49.50 and can be purchased by visiting miltoncentreforthearts.ca.

On March 20, the ominous, but very interesting sounding, The Intergalactic Nemesis comes to the Rose Theatre in Brampton. It's billed as a unique theatrical experience that blends radio drama with comic books. Three actors voice dozens of characters and create hundreds of sound effects while, projected on a two-story high screen, are 1,250 hand-drawn comic book images to visually tell the story. Tickets cost $25 to $55 and can be purchased by calling the box office at 905.874.2800.

Over at Stage West in Mississauga, the musical Fiddler on the Roof comes to an end on April 21. It will be followed by the quirky Avenue Q, which runs April 25 to June 30. The Tony Award-winning musical follows recent college graduate Princeton who moves into a shabby apartment in New York City all the way out on Avenue Q. Princeton soon finds out it isn't your average neighbourhood. For show times and ticket prices, call 905.238.0042.

A tale of good triumphing over evil will be told through dance when the Royal Winnipeg Ballet presents Sleeping Beauty at The Living Arts Centre in Mississauga on April 10. The characters made famous by the popular fairy tale such as Princess Aurora and Princess Desire will delight the audience as they dance across the stage. The performance features the music of Pyotr Ilyich Tchaikovsky with choreography by Marius Petipa. Tickets cost $55 to $110. To purchase, call the box office at 905.306.6000.

A few days later, the lovely and talented songstress Sarah Slean stops by the RBC Theatre for a performance. She's released a number of albums over her career but her artistic expression isn't limited to just song. She's appeared in film, published two volumes of poetry and is also a visual artist who has exhibited her work. However, she's best known for her music and has been nominated for several Juno Awards. Her most recent album Land & Sea, was released in 2011. Tickets cost $28 to $45 and can be purchased through the box office.