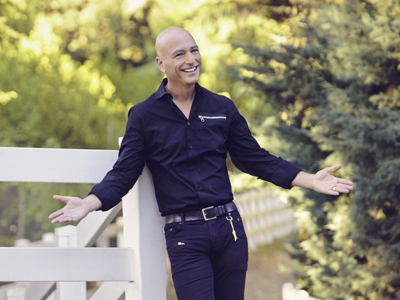 A pair of Canadian country musicians roaring across the country will make a stop in Hamilton at the FirstOntario Centre on October 16. Dean Brody and Paul Brandt, who both have a number of Canadian Country Music Awards and Juno Awards to their respective names, are co-headlining the Road Trip Tour. The musicians, who are both western Canadian boys, are among the biggest names in Canada's country music scene. Earlier this year, Brody released his fifth studio album ““ Gypsy Road ““ while Brandt's latest single “Nothing” came out in the spring. The duo will be joined by special guest Madeline Merlo. Tickets cost $40.75 to $94.75 and can be purchased through Ticketmaster.

Meanwhile, Hamilton Place is going to be hopping in the fall with a trio of concerts that should appeal to a diverse array of music fans.

Slash, the former guitarist with Guns N' Roses, comes to Hamilton Place on September 21 and he's bringing a few friends along with him. The Rock and Roll Hall of Fame musician will be joined by Myles Kennedy and the Conspirators at the concert that's part of his World on Fire Tour. Slash has had a successful career after his old band broke up and released his latest solo album, World on Fire, last year. Tickets cost $40.75 to $84.50 and can be purchased through Ticketmaster.

On November 4, Canadian rock band Three Days Grace will grace, pardon the pun, the Hamilton Place stage. The band, which has enjoyed hits with songs such as “I Hate Everything About You” and “Just Like You,” released its latest album Human earlier this year. Also appearing at the show is special guest Halestorm. Tickets cost $45.50 to $57.50 and can be purchased through Ticketmaster.

On November 16, the Barenaked Ladies come to Hamilton Place for a concert, where they will be joined by special guest Alan Doyle. The band is touring in support of its latest album, Silverball, which was released earlier this year. Most people are familiar with the band, that has had a string of hit songs over the years and have won multiple Billboard Music and Juno awards. Tickets cost $58 to $100 and can be purchased through Ticketmaster.

Those who like to laugh can check out Emmy Award-winning funnyman Howie Mandel when he comes to the Oakville Centre on October 6. Many know him from his work as a judge on America's Got Talent and his time on the game show Deal or No Deal. His live show includes mature language and content. Tickets cost $115 and can be purchased by calling the box office at 905.815.2021.

If you're looking for a somewhat different live theatre experience, why not check out Evil Dead – The Musical when it comes to the Oakville Centre on November 3 and November 4. It's based on the Evil Dead series of films and follows five college friends who accidentally unleash an ancient evil force while vacationing at a secluded cabin. How many plays come with a warning about the first four rows of the theatre being in the show's “splatter zone” and that attendees will get doused with fake blood? Sounds cool, doesn't it? And, don't worry, the fake blood is washable. Tickets cost $50 and can be purchased through the box office.

It will be an evening of R&B and soul courtesy of Jully and Jarvis on October 30 at the Burlington Performing Arts Centre. That's because Canada's Queen of R&B, Juno Award-winning singer Jully Black, is partnering with Jarvis Church for a night of music. Black has had a number of hits including “Seven Day Fool” and “Sweat of Your Brow.” Church, meanwhile, is a producer who also has enjoyed a successful solo career and got his start as lead singer with The Philosopher Kings. Tickets cost $69.50 and can be purchased by calling the box office at 905.681.6000.

Get ready to laugh when Canadian comedian Ron James hits the Milton Centre for the Arts on November 14 for an evening of chuckles. The 90-minute show will feature James and his usual high-tempo and frenetic take on contemporary culture. James, a Gemini-award winner for his writing on This Hour Has 22 Minutes, had a stint on the Global TV sitcom Blackfly. He was also named Comedian Of The Year at the inaugural Canadian Comedy Awards in 2000. The show is intended for a mature audience and may contain coarse language. Tickets cost $45 to $49 and can be purchased by calling the box office at 905.878.6000.

Fans of The Band won't want to miss this musical tribute on November 6 at the Living Arts Centre in Mississauga. The two-hour concert, called The Last Waltz – A Musical Celebration of The Band, will feature live musicians performing a number of The Band's hits including “The Weight,” “The Night They Drove Ol' Dixie Down,” “Up On Cripple Creek” and “Life is a Carnival,” just to name a few. The concert is an homage to The Band and also the film The Last Waltz, which documented The Band's final concert. Tickets cost $30 to $45 and can be purchased by calling the box office at 905.306.6000.

At the Rose Theatre in Brampton, a live stage version of the CBC Radio show The Debaters comes to entertain on September 29. It's billed as a comedy competition, quiz show and stand-up all rolled into one. It features Canadian comedians debating some of the biggest issues of the day with the audience picking the winner. Tickets cost $36 to $44 and can be purchased by calling the box office at 905.874.2800.