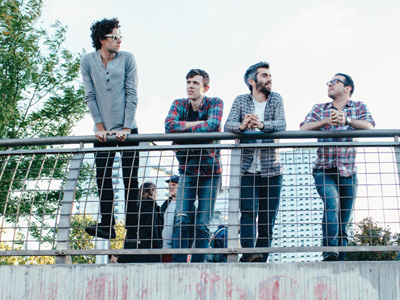 It will be a double shot of the classic 1970s sound when a pair of iconic acts from that decade make a stop at the FirstOntario Centre in Hamilton. The bands Earth, Wind & Fire and Chicago have partnered for the Heart and Soul Tour 3.0 that comes to the centre on October 29. The Grammy Award-winning Earth, Wind & Fire have released a bunch of hits songs including “Shining Star,” “Sing a Song” and “September.” The Rock and Roll Hall of Fame-inducted group successfully merged a number of genres, including soul, funk, jazz, pop and rock, into a sound that is uniquely their own. Meanwhile, Chicago is arguably one of the most successful American rock bands of all time with hits including “Saturday in the Park,” “If You Leave Me Now” and “Hard to Say I'm Sorry.” They've sold more than 100 million albums and were inducted into the Rock and Roll Hall of Fame earlier this year. Tickets cost $70.50 to $126 and can be purchased through Ticketmaster.

Just a few days later another Grammy Award-winner comes to the FirstOntario Centre when Carrie Underwood brings her The Storyteller Tour – Stories in the Round to town on November 6. She will be joined by special guests Easton Corbin and The Swon Brothers. The country singer is touring in support of her new album, Storyteller, which she released last year. It's her fifth studio album and a follow up to 2012's Blown Away. Underwood, who won season four of American Idol, blew up with her release of the single “Inside Your Heaven” and has enjoyed a strong following in country circles ever since. Tickets cost $69 to $111 and can be purchased through Ticketmaster.

If you have little ones, you might want to head down to the FirstOntario Centre for the Ice Age on Ice performances running November 18 to 20. It's a live show based on the popular series of animated films and includes Scrat, the silly prehistoric squirrel that kids absolutely love. Tickets cost $29.50 to $99.50 and can be purchased through Ticketmaster.

Newmarket indie rock darlings Tokyo Police Club have a concert on November 2 at the Oakville Centre for the Performing Arts. The band broke out about a decade ago with the well-received EP A Lesson In Crime, which featured a bunch of different and fun songs including “Nature of the Experiment” and “Citizens of Tomorrow” (a funny little ditty about robot domination of mankind). They've released four studio albums since then and dropped the five-track EP Melon Collie and the Infinite Radness: Part One earlier this year. Tickets cost $68 and can be purchased by calling the box office at 905.815.2021.

Popular Canadian a cappella quartet The Nylons will bring their Farewell Tour to the Burlington Performing Arts Centre one last time for an October 21 concert. The foursome, which rose to fame with covers of “Happy Together” and “The Lion Sleeps Tonight,” says they're calling it quits when it comes to touring so this is likely the last chance fans will have to see them perform live. At the concert, the singers will be joined by the 40-piece Burlington New Millennium Orchestra. Tickets cost $69.50 and can be purchased by calling 905.681.6000.

Those who love to laugh won't want to miss comedian Brent Butt when he comes to the Milton Centre for the Arts on October 29 for a night of stand-up comedy. The Gemini Award-nominated Butt, who has won several Canadian Comedy Awards, is likely best known for his long-running television show Corner Gas but gets out frequently for stand-up comedy sets and has performed at Montreal's Just for Laughs Festival. Tickets cost $46 to $49 and can be purchased by calling the box office at 905.875.5399.

The laughs continue at the Rose Theatre in Brampton when comedian Shaun Majumder comes for a performance on October 7. The Newfoundland native has appeared on the CBC show This Hour Has 22 Minutes and has garnered himself quite the reputation for his quick wit and his slice-of-life material. He's also won Gemini and Canadian Comedy Awards. Tickets cost $45 to $59 and can be purchased by calling the box office at 905.874.2800.

Influential Canadian rock musician Burton Cummings has a concert in Mississauga on October 28 at the Living Arts Centre. He's best known for his time with the band The Guess Who but has also enjoyed a successful solo career considering he was inducted into the Canadian Music Hall of Fame earlier this year as a solo artist (he's also in there as a member of The Guess Who). He and The Guess Who scored a number of huge hits with songs including “These Eyes” and “American Woman.” Tickets cost $70 to $90 and can be purchased by calling the box office
at 905.306.6000.