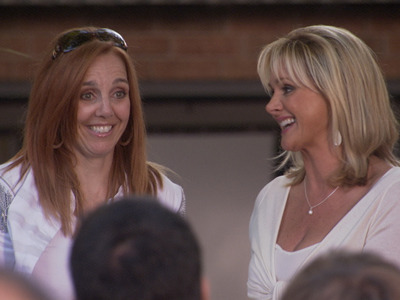 Sera Mansueto was going through the darkest period of her life and needed help the most, she went out to help others. Mansueto founded the Oakville charity Walls of Hope in 2005, a registered, not-for-profit charity that helps families in need by providing home interior makeovers and much more. She describes it as “Extreme Makeover without the TV budget and the bus and we don't tear it down we renovate.”
Mansueto had been a stay at home mom living a privileged lifestyle with a beautiful home and “everything that comes with it” when her husband of almost 20 years left her. Suddenly she was working minimum wage jobs with two young daughters to support. She answered an ad in the paper to do house painting and was hired by people just like her previous self. It was while working at one of these jobs that she decided she wanted to paint a room for a family that had fallen on hard times and hopefully bring some happiness and hope to them. “It was an amazing feeling and I was euphoric after the first one. I thought “˜I've got to do another one',” she says. “It was a small little idea that just snowballed and I had no idea it was going to keep on going. It just felt right.”
That was the beginning of the journey of Walls of Hope. They renovate and decorate homes operating solely on community spirit, passionate volunteers and donations from community businesses. Thus far, they have completed successful makeovers for 11 families and two public spaces. Mansueto's mission since Walls of Hope's inception is to transform the living space of families-in-need and provide them with the tools and resources to enrich their own lives. They typically renovate two families' homes every year, and continually strive to assist the family in any way they can.
Families are recommended by social workers and the final decision on which ones are chosen is decided after extensive interviews and background checks. A dedicated team of ten volunteers then gets together to plan and organize the needs of each family. As they learn more about them and their requirements, they contact community businesses for help and support. Volunteers from all over the Halton/Peel region (many from families that Walls of Hope has helped) and sometimes beyond, come together to help organize, sort, clean, paint, decorate and rebuild a family's home, usually in a time span of three days.
This past autumn, Mansueto was featured on the CBC show All For One with Debbie Travis as a community hero. Nominated by one of the families Walls of Hope had helped, she was selected from thousands of nominees from across Canada. The experience also resulted in a successful fundraising initiative when Debbie Travis came up with the idea of creating a calendar, Building with Studs and a fundraising night featuring male Walls of Hope volunteers with all proceeds going to the charity.
Their next project, renovating the entire Halton Trauma Centre in Downtown Oakville is slated for March with support from Studio H and Hallmark Homes. They also hope to raise awareness and community involvement with their inaugural fundraising gala “An Evening of Hope: Hard Hats and Halos” at Oakville's Otello's Banquet and Conference Centre on April 7.
A possible goal for the future is the formation of other Walls of Hope organizations in communities throughout Canada. “Walls of Hope was started from something I experienced that was the darkest, worst time of my life and yet out of it has come the best time,” says Mansueto. “In Oakville, I found a lot of good people that followed a good idea and made it a great idea. We are more than just home renovators, we are life renovators. We go in and renovate these people's lives.”
For more information about Walls of Hope visit wallsofhopecanada.org.