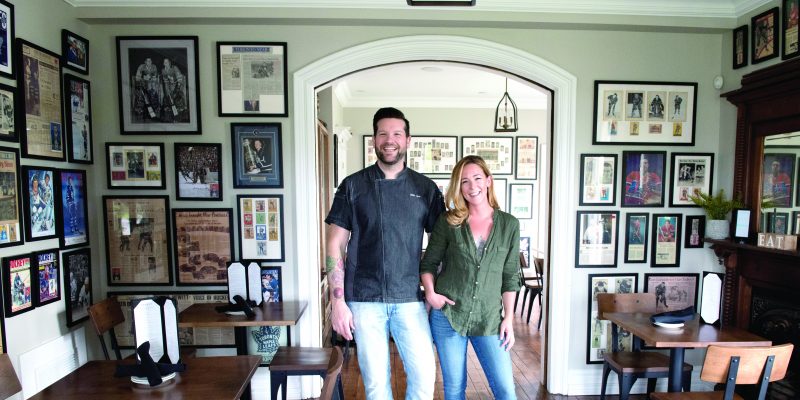 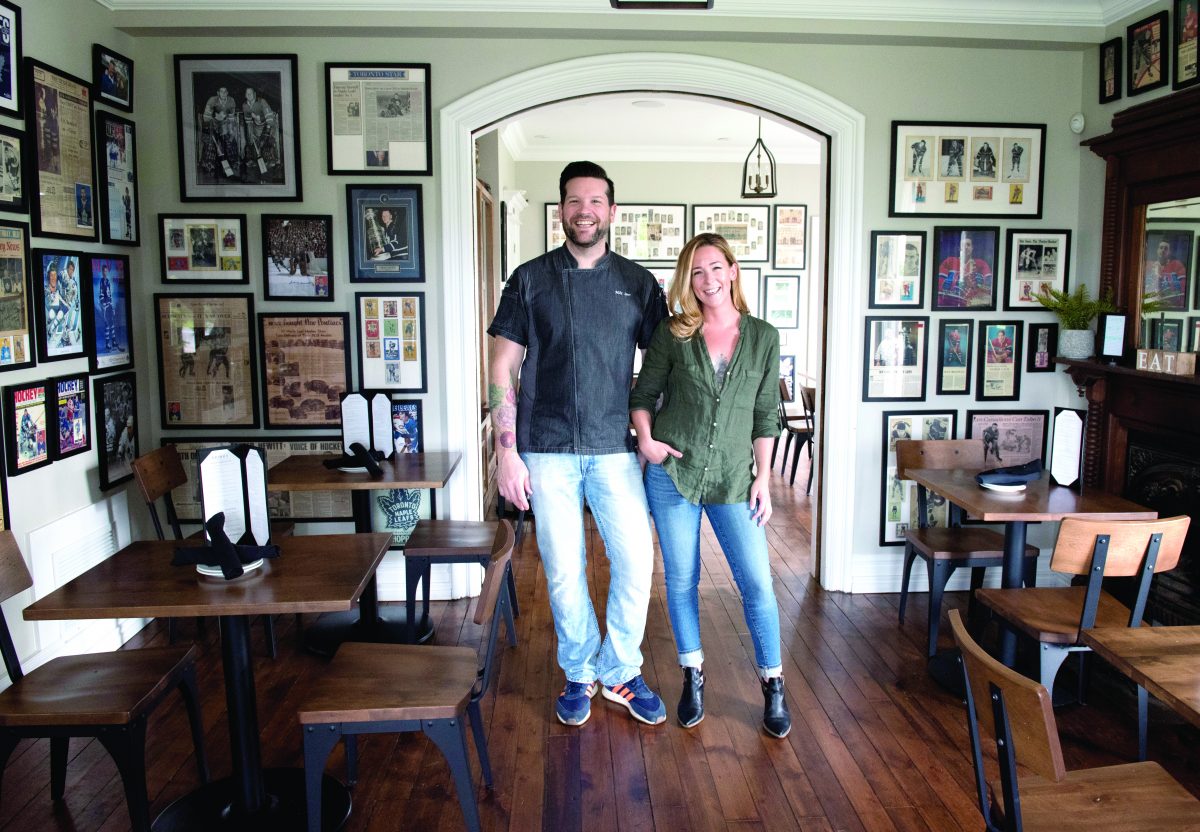 The story of how Mike Speer came to oversee the kitchen at Shy’s Place in Dundas, Ont. is as striking as the memorabilia that dominate the walls. Speer says it was serendipity – and a Moroccan chicken sandwich – that led him to becoming a partner in the restaurant.

Housed in an 1896 heritage home on Highway 5, Shy’s Place is a love letter to Rod Millard’s father, Lloyd “Shy” Thomas Millard, who passed away in 2011. Lloyd Millard earned the nickname “Shy” after playing Shylock in The Merchant of Venice in high school.

Three years before, Speer and his partner Morgan Smith were operating a food truck in Hamilton. After tasting their Moroccan chicken sandwich, then ordering 10 more for the office, Speer says they accepted an invitation to park their food truck outside the financial services firm of The Gryphin Advantage one Thursday a month.

“We didn’t know who the owner was, or who was paying, we just fed everybody lunch,” says Speers. Company owner, Millard was in the lineup for the food truck and introduced himself to the pair. Do you guys want to open a restaurant, he asked. “It was that quick,” recalls Speers. Millard had already purchased the heritage property, directly across from his financial business, saving it from being converted into a gas station.

Speers did an initial walk through of the house, which still had the original kitchen. “I had no idea how this was going to come together,” he said. But, his business partner Smith was also a contractor and had a vision for what the restaurant would look like beyond the mismatched wallpaper and old pipes.

The casual-fine dining restaurant opened in summer 2018 and the walls of this beautifully restored property are filled with decades of memories and history, collected by Shy over his lifetime. Everything from vintage hockey cards to framed LIFE Magazine covers. General manager, Kayla Sticklee says Shy’s family knew he kept a robust collection. “Shy always loved to keep things, but I don’t think they knew the extent of the collection he had.”

Shy’s vintage hockey collection features prominently on the main floor of the restaurant (Sticklee says The Hockey Hall of Fame contacted Millard, as his father had collected things they don’t have in their archives). The cozy upstairs rooms are named according to their collections. There’s the Kennedy Room with framed LIFE Magazine covers of JKF, the Bird’s Nest, in honour of Shy’s vintage Blue Jay Championship memorabilia, the Windsor Room dedicated to the Royal Family and, lastly, Shy’s Room, which displays Shy’s favourite things, like his Glenn Miller records.

Dining at the restaurant is like taking a seat at the Cheers bar. Shy’s Place has the same sort of warm, friendly neighbourhood feel – with food and a wine list to match. Italian dishes, such as Chicken Marsala, feature prominently on the menu. Speers employs Italian techniques, but wanted to keep the dishes accessible. “The food will speak for itself,” he says. “You don’t have to know the pasta is made fresh every day, but when you taste it, you’ll know.”

Speer says cooking runs in his family. His father owned a restaurant in Collingwood in the early ‘70s, when the ship yard was a booming industry. That love of food, and cooking, was passed on to Speer. “I knew what a béchamel sauce when I was five-years-old, because that’s how he made broccoli taste good,” he says. Speer includes seasonal entrees, vegan dishes, and classics like Steak Frites on his menu. His Moroccan Chicken sandwich is also a popular lunchtime choice. “It hits a home run every time I pull it out,” says Speer.

The staff make an effort to introduce new customers to the story behind Shy’s Place when they first come. Front of house staff will often give house tours between dinner and dessert – especially during hockey season. Though if Millard, who loves to host family and friends, is here, it’s just as likely he’ll be the one touring guests around.

Ultimately, it’s Shy’s personal collection of memorabilia and the connection it sparks in others that makes this restaurant special. “One of the most interesting things I find about the collection is every time my Papa and my brother come in, I can’t keep either one of them away from the walls,” says Sticklee.

Here, guests are encouraged to take a seat, have a glass of wine, and walk around.  “We’re the only restaurant that would encourage you to peek around at the wall behind you,” says Sticklee.