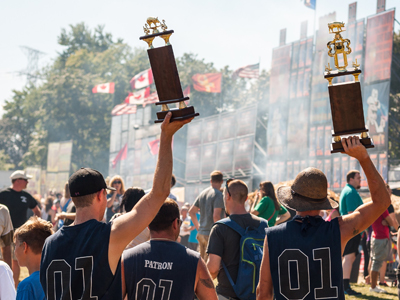 Get out and enjoy our communites this summer, there are so many festivals, events & places to explore.

ALL SUMMER
Summer Days in the Country
All summer ending September 1
Mountsberg Conservation Area, Hamilton
Visit Hamilton's Mounstberg Conservation Area's Raptor Centre between 12 p.m. and 2 p.m. daily to see live flying demonstrations featuring the Mounstberg Raptors. Explore the stroller-friendly Wildlife Walkway featuring eagles, hawks, owls and falcons as well as the Mountsberg bison herd and percheron horses, or let kids run, jump and play in the Cameron Barnyard where they can get up close and personal with the farm's sheep, goats and bunnies.
conservationhalton.ca

Movies Under the Stars
Thursdays from July 10 to Aug. 14
Parks throughout Burlington
Curl up to Burlington's annual summer event Movies Under the Stars presented by Tim Horton's taking place every Thursday at parks throughout the city. This popular event is the perfect way to spend evenings with family and friends so come early to reserve a spot and be sure to bring lawn chairs and blankets! This years films include Frozen, Muppets: Most Wanted, Turbo, Rio 2, Ender's Game and Mr. Peabody & Sherman. Rain delays/cancellations may occur.
burlington.ca

JULY
Toronto Pan Am One Year Countdown
July 11 & 12
Nathan Phillips Square, Toronto
The Pan Am Games will be coming to Toronto in 2015 but the city can't wait to celebrate! The Toronto Pan Am One Year Countdown will feature free, live music as part of PANAMANIA presented by CIBC, appearances by world-class athletes, a selection of Pan American foods, fireworks and the unveiling of the Cisco Toronto 2015 Countdown Clock.
toronto2015.org/one-year

Beaches International Jazz Festival
July 18 to 27
Woodbine Park, Toronto
Now in it's 26th year, the Beaches International Jazz Festival brings renowned artists, a series of workshops and an array of food trucks to Toronto's Beach community. For the first year the majority of performances, aside from Streetfest, will be taking place in Woodbine Park allowing festival-goers easy access to all stages so you can get the most out of your visit. This year's headliners include Teeny Tucker, Messenjah, Jay Douglas, amd Dumpstaphunk to name a few. Go online to see the full lineup.
beachesjazz.com

AUGUST
Mississauga Italfest –
Ferragosto in the City
August 9
Celebration Square, Mississauga
Join in the celebration of fun, food and festivities at the inaugural Mississauga Italfest. This free event is expected to draw approximately 12,000 visitors interested in experiencing “la nostra vita” (our life) through performances, children's activities, cooking demonstration, bocce and scopa tournaments and other traditional Italian past times.
mississaugaitalfest.com

JerkFest
August 9 & 10
Centennial Park, Etobicoke
Jerk cuisine and the pulsating music of the Caribbean come together in this annual festival, taking place at Etobicoke's Centennial Park. Take part in one of the many competitions like the Grace Hot & Spicy Jerk Chicken Eating Competition and the Western Union Drop-A-Six Domino Challenge for your chance to win a series of prizes, or, simply make a donation of $2 to this free event to receive two entries for a chance to win vacations to Jamaica and more.
jerkfestival.ca

Lakeside a la Carte
August 10
Spencer Smith Park, Burlington
Round up some friends, head down to the lake and make Lakeside í  la Carte your annual summer event. The setting is Spencer Smith Park, Downtown Burlington. Huge white tents provide a temporary home to more than three dozen restaurants, wineries and breweries. The area's superb chefs and vintners bring out their very best tastes to support this great event. Guests stroll from tent to tent, sampling wines, tasting delicious dishes…throw in a silent auction, the chance to win Air Canada or Via Rail tickets, and you have the makings of Burlington's Ultimate Summer Party. Tickets are $100 each with proceeds to the Rotary Club of Central Burlington.
lakesidealacarte.com

Hot & Spicy Food Festival
August 15, 16 & 17
Harbourfront Centre, Toronto
This year's festival dips into food and culture rooted in the past and renewed for the future. Enjoy a range of culinary delicacies, as well as hot rhythms and spicy grooves from the past and present. Check the website for specific performance details of the
three-day festival.
harbourfrontcentre.com

Winona Peach Festival
August 22-24
Winona Peach Festival is owned by 20 not for profit or charity groups. Their purpose is to generate money to go back into the community with this annual event. Entertainment, food vendors and a midway and a popular Arts & Crafts area, located in the beautiful park tree canopy area, where you can take a leisurely walk while viewing more than 75 vendors.
winonapeach.com

Canada's Largest Ribfest
August 29 to September 1
Spencer Smith Park, Burlington
Canada's Largest Ribfest, organized by the Rotary Club of Burlington Lakeshore, is ready for its 18th year of bringing you a family-friendly, four-day food extravaganza! As one of the leading annual events in the Greater Toronto Area, Canada's Largest Ribfest brings together 18 Ribber Teams from across North America, hungry to compete for the Best Ribs Title, and more than 150,000 people hungry to taste their mouth-watering fare!  There are also great musical guests, and activities and games for kids of all ages ““ all in beautiful Spencer Smith Park in Burlington on the north shore of Lake Ontario. The proceeds from this event go directly to the community ““ a good cause, good food, good times and the perfect way to bid farewell to summer.
canadaslargestribfest.com

Canadian International Air Show
August 30, 31 & September 1
Exhibition Place, Toronto
The Canadian International Air Show (CIAS) is Canada's largest and longest-running aviation display; and one of the largest air shows in North America! Over its six-decade-plus history, the CIAS has been proud to feature many air show “˜firsts' including appearances by the Concorde, F-22 Raptor, the V-22 Osprey and more! Powered by the incredible efforts of almost 200 volunteers, the CIAS continues to thrill air show fans from around the world with its diverse line-up of aviation awesomeness each Labour Day weekend.
cias.org