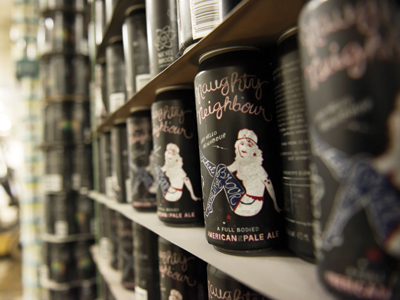 Rewind the clock back to 1992 and Blue Jays fever gripped the country like a snapback cap one size too small. Yet in the midst of Jays mania there was also another craze sweeping the nation: home brewed beer.

Home brew retail outlets like Better Bitters in Burlington flung open their doors and customers flocked to buy ingredients to concoct beer or wine anyway they liked. And business was good for the small brew-your-own retail outlet; it produced about 20 to 30 batches a day and, though that number might seem modest by today's standards, Better Bitters was faring far better than, well, bitter.

But like blazers with chunky shoulder pads, the movement gradually disappeared. Faced with a precipitous downturn in sales many once-thriving businesses were forced to close. Peter and John Romano, the co-owners of Better Bitters, had other ideas.

Rather than close up shop they decided to make the business more efficient by expanding their operation in December 2004 with a new enterprise called Nickel Brook Brewery Co. (which gets its moniker from the compound of John's two kids, Nick and Brook).

Eight months later Nickel Brook Brown Ale arrived on the shelves of the LCBO. It was a momentous occasion that helped shape the brewery into what it is today ““ one of the top ten most popular craft breweries in Ontario.
The locally-owned brewery found success with its apple-flavoured and gluten-free beers and that allowed the owners to focus their attention on craft beer, their true passion.

Today, they churn out more than 1.5-million litres of beer in a variety of flavours like Cause & Effect, Green Apple Pilsner, Imperial Stout, Naughty Neighbour and more, and many of its creations can be found in a variety of establishments scattered around Hamilton, London, Brantford, London and beyond. Available in bottles or on tap, there's plenty of Nickel Brook to be had locally.

It's hard to say exactly what's driven craft beers sales through the roof in the past couple years, but independent breweries like Nickel Brook in Burlington surely aren't complaining. Some Nickel Brook brands have seen sales jump more than 100 per cent in that period, which has put great strain on many small(er)-scale breweries to churn out more and more product.

Due to the drastic sales uptick, the 22-year-old company realized it was in desperate need of another space, another brewery. “We got up to capacity where we couldn't make enough beer,” says John Romano, who is a co-partner along with his brother Peter.

At the same time it was also looking to rebrand itself with a new logo and label. It's diamond-shaped logo served it well since the beginning, but John and Peter decided it was time to spice things up with a whole new design.

After months of searching they connected with a beer company called Collective Arts, it was a perfect marriage.
“We we're looking for someone to rebrand us and we really liked their artistic side of things. We made a deal where they would rebrand us and we would help them brew their beer.”

Then it was on to the search for a new location. They finally found a good candidate in a Sleeman plant that was about to be shut down in Dartmouth, Nova Scotia. “We got a bid, shut down the brewery and moved it to storage.” A plan was in motion.

And that's likely how the future would have unfolded for the draught duo if it weren't for a speaking engagement John attended prior to the purchase of the old plant.

“I was speaking at a chamber event for a Halton small business meeting and the City of Hamilton Port Authority (HPA) was there and they heard my story and loved it and approached me.”

The HPA explained they would be thrilled to put a brewery back into Hamilton using the old Lakeport plant located along the waterfront at 207 Burlington Street. Despite the promising opportunity, a visit to the site revealed some shocking findings ““ the facility was wrecked.

In fact, a part of the building was so destroyed it needed to be torn down. Yet despite its rough shape, HPA and Nickel Brook decided the facility was too good an opportunity to pass up. After sizeable investments by both parties and months of work the facility finally opened the taps this past summer, breathing new life into the future of both companies.

“It's a ways away from being fully done, but it's able to produce beer right now. Our core brands ““ Headstock, Naughty Neighbour, Cause & Effect and the gluten-free beer ““ are coming out of Hamilton right now and our seasonal beers are coming out of Burlington,” notes John.

But don't hold your breath for another retail outlet in Hamilton anytime soon. At the present time due to provincial regulations breweries are only allowed one retail license, which means Hamiltonians will still have to jog to Burlington to pick up a keg, six pack or growler, which is a large glass container that holds the same amount of fluid as a pitcher.
The Nickel Brook rebrand also took place during the establishment of the new facility, and now every bottle leaves the plant with a slick new label and logo with three ovals that intersect in the shape of an atom. Simple “˜NB' lettering sits in the middle while “˜Nickel Brook Brewing Co.' underscores it beneath. At the top of the label sits Nickel Brook's new slogan: A Miracle of Science.

Both simple and eye-catching, the new logo has served as the icing on Nickel Brook's proverbial cake and Romano says sales have spiked since it was introduced, but he's cautious not to pin all that success on the new logo alone. Rather, Romano sees it as the finishing touch. Due to its sleek logo, many LCBOs now stock Nickel Brook beer in more optimal spots, causing more people to give it try. Once they try it the beer speaks for itself, he says. “If it's not a good product you'll only get one sale and the customer will buy something else next time.” Put another way, the logo has helped get the beer into people's hands, while the taste has them coming back for more.

Watch for special events and more, as the new facility reaches completion in November. For more info: nickelbrook.com