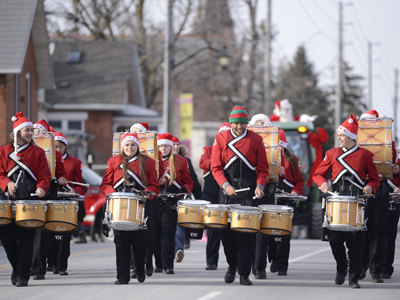 Enjoy the season and keep your holiday merry and bright with this roundup of local winter and holiday-themed events.

United Way of Milton's Christmas House Tour
What a great way to get into the holiday spirit!  Presented by Springridge Farm, this event provides access to homes that have been professionally decorated for the holidays while showcasing the latest trends in Christmas décor and holiday entertaining. Tickets for Friday's Dinner & Limo Tour are available for $80 while tickets to Saturday's self-guided tour can be purchased for just $30. Go
online to find a list of retailers selling tickets to this
year's event.
Friday, November 18 & Saturday, November 19
Throughout Milton
miltonunitedway.ca

Milton's Heritage Parade of Lights
Following St. Nick's tour through Country Heritage Park on his specially crafted wagon, families can warm up in the heated Gambrel Barn where kids can meet the man himself and tell him what's top on their Christmas wishlists. Be sure to dress for the weather as a portion of the day's events take place outdoors. Admission by donation.
Saturday, November 19
6 p.m. to 10 p.m.
Country Heritage Park, Milton
countryheritagepark.com/events

Christmas Event at Ireland House Museum
Join the Ireland House Museum for an old-fashioned Christmas with the sounds, smells, tastes and sights we've come to associate with the season. Tour the historic Ireland family home while sampling baked goods made on the 1830s Rumford hearth or a bowl of soup cooked on the antique woodstove. Visitors will also have the chance to ride in a horse drawn wagon, visit the petting zoo and make a keepsake craft. Admission is $10 for adults, $8 for children ages 4 to 16 and free for children 3 and under.
Sunday, November 20
11 a.m. to 4 p.m.
Ireland House Museum, Burlington
museumsofburlington.com

Burlington's Santa 5K 2016 Run/Walk
Participants will run or walk 5K through the downtown area while dressed as Santa! Anyone who decides to de-Claus mid-run will be disqualified, so maintain your holiday cheer by keeping those red velvet suits on. Proceeds from the run will help support your selected charity of choice, go online for pricing and to register.
Saturday, November 26
Downtown Burlington
santa5k.ca

21st Annual Festival of Lights
Join in downtown Burlington's longest running festival running daily along the city's waterfront from dusk until dawn. From December 2 through to January 10 sip hot cocoa lakeside and take in the wonders of the holiday season.
Friday, December 2 to
Tuesday, January 10, 2017
Spencer Smith Park, Burlington
burlingtonfestivaloflights.com

Courage Polar Bear Dip
Hundreds of people jump into the icy cold waters of Lake Ontario at the Courage Polar Bear Dip each year while thousands watch and cheer them on. Some show up for the incredible festival atmosphere, some want to try something a little over the edge to ring in the New Year, others just want to get their faces and crazy costumes in the local and national media. No matter what brings them to Coronation Park on January 1, each dipper is helping raise funds for a great cause. Net proceeds from the Courage Polar Bear Dip have been given to World Vision Canada since 1995. In that time approximately $1,471,000 has been raised to help fund clean water projects around the world.
Sunday, January 1
First wave plunges at 2 p.m.
Coronation Park, Oakville
polarbeardip.ca

Santa Claus is coming to town!

Milton Santa Claus Parade
Since the first parade in 1933, Milton has been a stop on Santa's annual parade route. Don't miss out on all the festive fun, bring your loved ones to this historic parade as it travels along Milton's Main Street.
Sunday, November 20, 1:30 p.m.
miltonsantaclausparade.ca