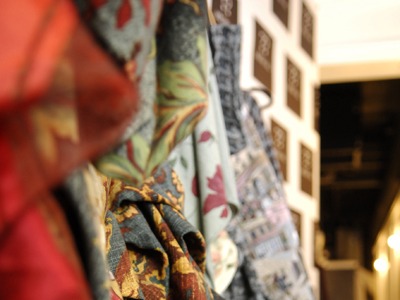 It's not often that a young designer enters the Canadian fashion scene in such a short time, or takes the risk of opening his own retail store before he's become a household name. But, that is just what 20-year-old Adrian Wu has done, and he couldn't be happier.

Sitting down with Wu in his tiny shop on Locust Street in Burlington, it's immediately clear that this is a young man who is determined to follow his dreams, and put everything on the line to make them come true.

“As human beings we should be living with a purpose. Love is the happiest emotion we feel ““ I do it for love,” he says.

The front of the shop showcases some of his favourite gowns. These are delightful creations with custom tailoring and specific focus on the silhouette. A few racks contain pieces from his ready-to-wear collections; but the real magic is just down the hallway. Wu's shop buzzes with the energy and magic of creativity, as a seamstress works to make his dreamy dresses come to life.

Wu calls Burlington home, having grown up there and attended Hillfield Strathallen College. “I have worn a uniform since the age of three!”

After Hillfield, it was off to the University of Toronto. But Wu soon found that his heart wasn't in his studies, and he instead taught himself to sew with his Mother's sewing machine. In six months, he had created 50 dresses and was well on his way to a bright entrance to the Canadian fashion industry.

He worked on building a portfolio and a website, and applied to and was accepted to the prestigious Istituto Marangoni in London to study fashion design. By the start of 2010, with plans for further study in his new field, he worked on two charity fashion shows for Hillfield Strathallan College and The Halton Region Chinese Association.

Then came his big break. Wu was offered the opportunity to show at Vancouver Fashion Week. He boarded a flight for Vancouver to do his very first show, and the same day was offered a segment as a fashion reporter for MuchMusic's Much on Demand.

The whirlwind continued for Wu after attending his first fashion show, as well as showing his own designs for the first time. He was introduced to Shawn Hewson of Bustle Clothing, who is also a judge on Canada's Project Runway.

So with his first Fashion Week behind him and a new mentor, Wu opted to defer his attendance at Istituto Marangoni, and with the help of his family opened his “first” retail store in Burlington.

This isn't just any retail store though. Wu's forte is making delightfully creative couture style dresses that, as he says, “make every woman look beautiful.”

If what you are looking for is a one-of-a-kind creation, made-to-measure just for you, than Wu's shop should be your next stop. With a seamstress on site, you can really have the dress of your dreams, whether it be for a special occasion, holiday party, prom, or even your wedding.

There are two other lines available at the store that fall under A.W. by Adrian Wu. These are ready-to-wear and sportswear collections, perfect for clients who love classic style.

So what's next for this young darling of the fashion scene?

Wu is working away at his spring/summer collection, and is already planning his show for Toronto Fashion Week.

“I am taking fashion one day at a time right now as I know it is a fickle business. I am weighing each opportunity as it comes up as I want to build my name with one underlying theme in mind…love. I have a lot of love, and that shows in my clothes.”