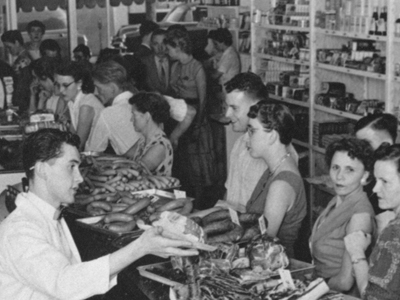 Like many Canadians in the 40s and 50s, Rudolf and Frieda Denninger immigrated to Canada to build a new life on a basis of old world skills. Using his knowledge and expertise gained as a sausage maker in Germany's Black Forest Region, Rudolf, along with his wife Frieda, opened their first store in Canada on Hamilton's King Street East. That store was the now widely popular Denningers and the year was 1951. Creating a loyal customer base of European immigrants longing for a taste of home, it's no wonder the grocery/bistro chain is now celebrating 60 years of bringing “foods of the world” to Ontario. Always looking to provide the best for customers, Denningers operates its own processing plant and traditional smoke house to produce sausages and deli meats using family recipes and has partnered with carefully chosen international specialty producers to create its own house brand of mustards, pasta sauces, pestos and more. With six locations and plans to expand in the near future, today, this 60-year-old food giant is run by second and third generation members of the Denningers family allowing old world quality and traditions to continue to shine through.
denningers.com