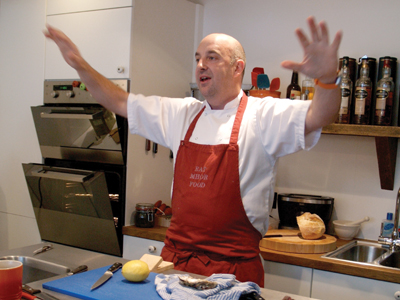 I should have worn a seatbelt. A conversation with Chef Tom Lewis can be a wild ride through the culinary landscape in the hauntingly beautiful glens and lochs of central Scotland.

Now, one wouldn't normally think Scotland high on a list of culinary must-dos. Images of meat cooked gunmetal grey and rounds of haggis spring to mind. But, from the highlands to the lowlands, there's a gastronomic shift of seismic proportions taking hold. It surfaces as a deeply held respect for small farmers and artisan producers. From foraging dulse and mushrooms to aging handmade whisky; the gardeners, farmers, fishermen and shopkeepers are embracing the wisdom that small is better.

And in the kitchen, chefs have embraced the local food movement with gusto. Some ““ like 40-something Tom Lewis ““ can jam-pack a conversation with history, family tales and recipe secrets, all served up in non-stop delivery sprinkled liberally with infectious humour.

Getting to Lewis is an adventure in itself. His award-winning inn ““ Monachyle MHOR ““ sits out-of-the-way at the dead end of a long, winding laneway. The 18th century property was originally a farmhouse, then a bed and breakfast and, in its most recent reincarnation under Lewis's skilful hand, a 14-room boutique inn that has become a regular pilgrimage site for Scottish foodies. Recognized as one of Scotland's most accomplished chefs, the self-taught Lewis learned largely at his mother's apron strings. She cooked with what she had available and he credits her with infusing him with confidence in the kitchen.

Pull the string on the chef's back and the story spills out, rapid-fire. “We were farmers, but it didn't pay the bills. My mother decided she wanted a bicycle for my brother, so she sold tea and scones. Then she wanted a large stove, so she added soup and sandwiches to the fare of tea and scones. It kind of grew from there ““ to a B&B and then an inn.”

The original pink-washed farmhouse comes aglow as it catches the morning rays of light. Inside, it's a warren of cosy spaces: a small bar with a roaring fireplace where guest Prince William relaxed and chatted before dinner; an oak-panelled lounge lined with bookshelves and pictures of life in the Scottish countryside where celebrities such as Ewan McGregor and Gerard Butler nibbled on pastries. Chic bedrooms in the old coach house are havens of luxury with deep tubs, steam baths, fireplaces and soft chairs to curl up in while getting lost in glossies on Scottish estate life.

They come for the laidback solitude. And the food. Lewis is so committed to sourcing ingredients locally that on a misty morning walk over the hills of his 2,000-acre estate overlooking Loch Voil and Loch Doine in Trossachs National Park, you're likely to come face-to-face with flora and fauna that will end up on your plate.

“We have about 1,000 black-faced ewes and all our lamb and beef come from the farm,” he says. “Guests like to help collect eggs from the henhouse ““ we get several dozen each morning.” They regularly knock on Lewis's door at sunrise, asking to take Black Betty, his Labrador retriever, on their roundabouts.

Add vegetables from the garden ““ leeks, turnips, kale, Swiss chard, pumpkins, pears ““ and mushrooms from the forest (Lewis is an enthusiastic forager). When he needs to look beyond the boundaries of his own farm, he is passionate and diligent about sourcing ingredients like hand-dived shellfish.

“We're big fans of the slow food movement and respecting traditional ways. We use seasonal foods. We buy locally. It's important to ask where food comes from. We've got to be more responsible ““ and there's added value in that.”

Keeper of the Quaich
It was also royalty ““ this time Queen Victoria in the mid 1800s ““ who sang the praises of Perthshire, elevating the lakes and mountains in the southern Highlands to a desirable tourist destination. For Andrew Symington ““ owner of Edradour, Scotland's smallest distillery ““ that focus tapers down to a golden liquid favoured around the world. Symington is a Keeper of the Quaich, a society of whisky distillers committed to safeguarding the history and integrity of Scotch whisky.

“I bought my first cask in 1988 from a broker and sold the vintage whisky one by one,” explains Symington. “My dream was always to buy my own distillery.” It was a dream he realized in 2002 when the 1825-era whitewashed stillhouses of Edradour came up for sale on the market.

With the entrepreneurial Symington at the helm, business has been booming.

“We now produce 21 different variants of single malt whisky, including a peat-style malt that's developed a bit of a cult following.”

Producing 100,000 litres of alcohol each year from what are the “smallest legal stills in Scotland” (any smaller and they'd be squirreled away in the hillsides), Edradour's rich whiskies come from the slow distillation process of local ingredients. According to an old distiller's yardstick, the smaller the still, the finer the taste.

“It all comes down to using malted barley from Inverness, the small size of the copper stills, the shape of the stills and the soft  water we take from eight local springs,” claims Symington. “We really are what you would call the last handcrafted whisky in Scotland. Everything is done with the eyes, hands and nose.”

The distillery buildings are nestled into a pocket glen with its own little microclimate. Poured into Spanish sherry-casks, the barrels are stacked in the cool, stone warehouse where the whisky is exposed to four distinct seasons of maturation. In summer it is warm and evaporation happens (each year about two per cent of the liquid “the angel's share,” is lost) while in the winter months it is cold and there is very little evaporation, but the decade-long aging process continues.

As we start to leave, Symington turns and muses like a true Keeper of the Quaich: “Even though I own Edradour, my job is really as a custodian. My goal is to leave it better than I found it.”

If you go
Monachyle MHOR mhor.net
Seven-kilometres down a narrow laneway in the rolling hillsides of the Perthshire district, Monachyle MHOR truly is a getaway destination. Award-winning chef Tom Lewis delivers a five-course table d'hí´te that causes diners to swoon. In the fish shop and café he owns in nearby Callendar, guests can see the maestro at work in the kitchen ““ through a series of seafood demonstration classes. MHOR Fish was voted one of the 50 best cafés in the United Kingdom.

Edradour Distilleryedradour.co.uk
The one-hour tour starts with a dram and a walk through the historic distillery. The 10-year-old single malt, 12-year-old Highland single malt and the 1968 Jewels of Scotland (at $590/700ml) are available in Ontario at the LCBO.
Other small Scottish producers who focus on local, sustainable ingredients are: