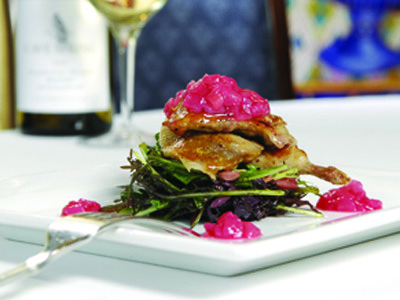 Not many people think to reach for rhubarb in their medicine cabinet but up until about 200 years ago rhubarb was valued for its medicinal qualities. Today, we appreciate rhubarb as a delightful ingredient found in desserts, sauces, soups, salads, preserves and beverages.

Rhubarb is believed to have been cultivated by the Chinese as early as 2700 BC. Its roots were used in traditional Chinese medicine and in medieval Arabic and European prescriptions. Rhubarb's roots and stems are rich in anthraquinones, which are known to be cleansing. It became quite desirable because of its reputation and that combined with the expense of transportation across Asia caused rhubarb to become much more expensive than other valuable herbs and spices of the time such as cinnamon, opium and saffron in medieval Europe.

Its use for culinary purposes was first documented in 17th century England. In the United States, it became known as the “pie plant” even referred to as such in Laura Ingalls Wilder's popular novel The First Four Years. A soft stick of rhubarb, dipped in sugar became a customary and affordable sweet for children in Sweden and the United Kingdom.

With its one-of-a-kind taste and abundant use in desserts, many think it to be a fruit but even though it often behaves as such it is indeed a vegetable. An ample, leafy plant, growing two to three feet wide and tall, it is grown mostly for its plump stalks and also makes an appealing, decorative plant. Rhubarb provides important vitamins and minerals including: vitamins C, E, K, folate, calcium, iron, potassium, sodium and zinc. One cup of raw, diced rhubarb has approximately 27 calories.

Colour may vary from differing shades of green, light pink to vivid ruby red. The colour results from the anthocyanins, and changes according to both rhubarb type and the way it is produced. Colour has no effect on its suitability for cooking. Many prefer the red types for their attractiveness, taste and tenderness, although the green varieties tend to be a bit more hearty and prolific.

With the aid of greenhouse production, rhubarb is available throughout much of the year and can be consumed as soon as it is harvested. Outdoor varieties are named McDonald, German Wine and Valentine. Greenhouse types are known as Sutton and Victoria. Hothouse rhubarb can be found at markets in early spring, before outdoor cultivated rhubarb is available. Hothouse rhubarb has very diminutive brilliant yellow-green leaves and is usually rosier in colour, more delicate and sweeter than those grown naturally outdoors.

In the United Kingdom, the first rhubarb of the year is harvested by candlelight in darkened sheds scattered around the renowned rhubarb-growing triangle of Wakefield, Leeds and Morley. Wakefield also has a celebrated rhubarb festival and the Wakefield Rhubarb Run offers tours of these forcing sheds.
It is important to note that only the stalks in rhubarb are edible as the leaves, which are removed at harvesting, are toxic containing a substance called oxalic acid crystals that can result in poisoning. Care also must be taken not to digest rhubarb with frost damage, which can cause the oxalic acid crystals to move into the stalks.

When purchasing rhubarb look for stems that are firm, crisp and upright and wrap it before storing it in the refrigerator. It can be frozen, if care is taken to clean it and cut it into pieces or have it blanched and covered with light syrup.