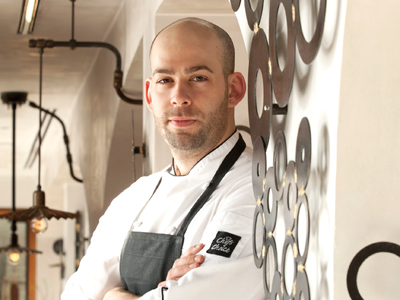 7 Enoteca is both unusual for this region and exactly what people expect in Oakville. Unusual because the atmosphere is what you'd likely find in a bustling metropolis like New York City: busy, crowded and loud, where sound bounces off the unique marble floors, and aromas waft from the wood burning pizza oven that's in full view of lunch and dinner patrons. Similar to NYC, there's often up to a two-hour wait for a table from 6 to 9 p.m. on weekends, and no reservations are accepted. Clearly, it's not the calm, white tabled-clothed Italian eatery common in gentrified towns.

Yet, considering the Oakvillian exacting standards for quality food, fine ingredients and an experience in sync with the price tag, 7 Enoteca is the destination for the area's food-experienced connoisseur. “The clientele in this area is well-travelled,” says 7 owner Artur Koczur. “They understand quality food, have been to Italy a number of times and they know what the best possible ingredients are. This includes people from, not just this city, but the GTA, Woodbridge, and the Niagara Region too.”

Koczur, who opened the Green Bean in Oakville's Town Square in 2004, says he had the concept for 7 long before he had the location: “I wanted to create a place where people could eat like I like to eat,” he says. Then luck struck and a space across from the Green Bean became available, and a 55-seat 7 opened two years ago. Building a word-of-mouth reputation, it expanded a year later to the 115-seat contemporary concept it is now: an upscale pizzeria with full menu focusing on seafood, imported cheese plates and an Italian wine list. The generous dose of designer décor makes good use of the arching low ceilings, industrial metal light fixtures and cowhide-lined marble bars.

Koczur, originally from Poland but self described as “Italianish,” is proud of sparing no expense for both the décor and menu, noting many products are imported from Italy, including the entire wine list of exclusive labels you can't find at any other restaurant in the city or the local LCBO. The orange curved benches that compliment the Scandinavian-style dark wood chairs are upholstered in Lamborghini leather. Even the pizza and bread dough has pedigree: the wheat  flour is flown in from Italy and the long fermentation>> >>period but quick bake time pizza dough is a recipe from Naples.

The wood-burning oven, surrounded by counter seating that turns pizza throwing into a spectator sport, is as authentic as you can get on this continent. It's built by third generation artisans from Naples, says Koczur. “Every piece of the oven was flown here. We put two people up in a hotel for two weeks, and they built the oven brick-by-brick for the most authentic pizza-baking experience you can create.”

But if you ask manager and marketing coordinator, Cristina Carpio, “Fresh, local and authentic are the core values of the restaurant,” she says, placing a particular emphasis on local foods from regional suppliers.

Fresh, local and authentic with plenty imported from Italy, including truffles that arrived for the chef's inspection during our interview, is apparently the competing, or complimentary, focus. Enter 28-year-old chef Adam Hijazi to tie it all together. “We're blending local ingredients with traditional flavours,” he says, “by bringing in some items that are very popular in Italy but grown around here such as chestnuts, heirloom tomatoes, mushrooms and quince.”

Chef Hijazi arrived at 7 in March of 2013 after teaching at George Brown College and working in France and Italy to expand his culinary expertise. He's parachuted into a solid dining concept actualized by the owner, but confident he can put his stamp on the evolving menu items. He'll start with seafood, a personal specialty after working six months in Marseille at a Michelin star restaurant that was, he says, “identified as the best seafood restaurant in all of France.”

“We are importing fresh fish from Nova Scotia,” he says. “Whole fish ““ 50 pound halibut, 90 pound sword fish ““ will be caught on Wednesday, put on a plane, and be on our menu Thursday evening. It's high quality fresh seafood that you don't see much of in the Toronto area.” Hijazi is anxious to add is own touches learned from work experience in France and Tuscany: “I've travelled to various regions to understand the cultural influences and try to bring that here,” he says. And he keeps a eye on international food trends too, like those currently originating from Spain and a few years ago, Denmark. He hopes to have the flexibility to travel more because, he says, “having those experiences inspires and pushes creativity.”

The menu at 7 might change seasonally, and so will the East Coast catch of the day, but what likely won't change is the pizza made on bubbling charred Napoleon crust (especially the classic Margarita) and the most popular, and classically Italian, item: grilled wild calamari. Owner Artur Koczur's reasoning is simple. “Pizza,” he says “is not an original idea, but we are doing it the best possible way with the best quality products creating the best food you can have.”