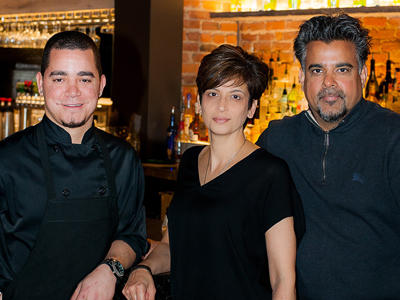 What was once home to a prominent Hamiltonian is now home to locally-sourced cuisine, signature cocktails, and a sophisticated, rustic ambiance attained by retaining original details.

Sitting on a soft, leather stool at the bar at Radius, a rather proper-looking older gentleman stares down at me from his canvas. Original owner of this now dining establishment on James Street, Isaac Buchanan watches over diners from his perch behind the bar. A prominent businessman, one of the two newly-adjoined historical buildings that make up Radius was his home. Buchanan played a significant role in the City of Hamilton's history, founded the Hamilton Board of Trade, advocated for a central bank well before the Bank of Canada was formed and was involved in bringing the Great Western Railway to Hamilton.

As any respectable gentleman of his time, Buchanan's residence was stately with soaring ceilings and fitted with all the trimmings and details fashionable for the day.

Paven and Bella Bratch, husband and wife and owners of Radius, took care to retain as many original details as they could while they renovated the restaurant last fall.

Now, the marvelous textures of the original brickwork set the backdrop for Radius, along with newly-restored original tin tile ceilings, and barnboard details recovered from their farm and home nearby.

“We had a group of Mennonite carpenters renovating the barn at our farm in Carlisle. When the job was done, we decided to have them do the work at the restaurant,” says Paven Bratch, as we admire the newly restored ceiling. “They use walnut shells to gently remove the old, peeling paint and not damage the tiles.”

Extravagant chandeliers set the tone in the dining room, though new and sourced from Burlington, they perfectly suit the space. The space Bratch has created is one that is at once special enough for a formal occasion, but cozy enough to spend a night lingering over a bottle of wine in the bar. These design touches, just as the ingredients in the kitchen, are found within the local “radius” of the restaurant, wherever possible. On the menu you'll find dishes inspired by the season, and dotted with ingredients from the couple's own farm.

“We'll first have fresh spring herbs, and then rhubarb,” says Bella, “last year we had so much rhubarb, chef made a wonderful preserve that we served with our weekend brunch.”

At dinner, choose from a selection of appetizers made for the table to share: Charcuterie & Cheese Board; Wild Mushroom Crostini with porcini, goat cheese and grana padano; Buffalo Cauliflower served with blue cheese sauce or the popular house-made Hummus Plate.

Having grown up in Hamilton, Paven is driven to use everything he can from the city he loves. As a youngster, his father owned the pharmacy just across the street from what is now Radius on James Street, so he is without a doubt a fixture in the community. While the restaurant doesn't attest to any specific distance for sourcing, they use the best, freshest available, local when possible including delectable macarons for the dessert menu sourced from a bakery in the neighbourhood. He nods toward another newly-opened eatery on the street and says, “They're great people, they were here last weekend. It's a great neighbourhood, a great community.”