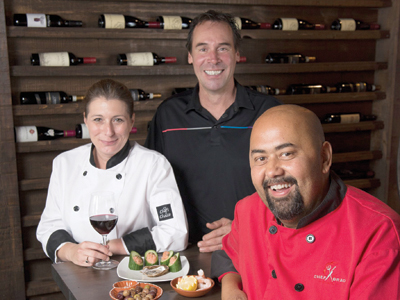 Cuisine aside, the vast majority of restaurants, pubs, wine bars, gastro pubs and other cheekily-named establishments tend to tread the same path: an appetizer, a main and a dessert.

It's a simple three-step formula that's worked wonders for countless establishments; so, why mess with success? Of course, not every establishment chooses to abide by the unwritten, three-step food consumption rule and Barra Fion in North Burlington is the latest establishment that looks to shake up our eating habits with a fresh take on, er, food intake.

Some may describe Barra Fion as a tapas and wine bar but, in all fairness, that description might be undercooked. It takes great pride in its 4,000-pound wood-burning pizza oven imported from Washington, DC and its elaborate assortment of pintxos, a culinary rarity culled from northern Spain.

While many restaurant patrons today are no doubt familiar with tapas ““ small plated dishes with “high impact flavours,” says Barra Fion Head Chef Brad Townsend ““ most will be perplexed by a pintxos (pronounced “peen-chose”).

Have no fear curious chewers, for pintxos, like tapas, is best explained not by the contents of the dish itself, but rather, by the way in which the dish is served ““ in this case, on a stick. Pintxos literally translates to “spike” and as such every single order comes with a skewer or spike thrust into the heart of the dish.

A tiny toothpick could impale some pintxos; others could be speared with a sizable skewer. Regardless of size, both tapas and pintxos at Barra Fionn are meant to be social meals, best enjoyed when shared and sampled amongst friends and family.

As Barra Fion looks to stay true to its Spanish and Mediterranean roots, it also isn't afraid to ease up and change some of the traditional dishes. As owners and husband-and-wife team Ted and Michelle Kindos tell it, much of the fish has been stripped from the menu in a bid to appeal to Canadian sensibilities.

Sure, you can still find dishes like Salmon a la Braza”“ an 8oz wild Pacific salmon with lemon, tarragon, capers and blazed with white vermouth and topped with charred scallions ($20)”“ but the menu simply isn't teeming with fish as would be the case if it were offered in the climes of Northern Spain, a very fish-friendly area, according to the duo.

Barra Fion is still in its infancy and excitement permeates the place. It first opened its doors on August 10th but little betrays its youth, aside from the sheen on the black walnut bar top, which was milled from a tree that fell during a storm in Burlington.

Then again, that could come down to experience. Both Ted and Michelle are no strangers to the restaurant business. Ted has owned Gator Ted's Tap & Grill since 1994, while Michelle holds a culinary degree and has been involved in the industry for decades. She also owns a catering company called “Savouring the Moment.” Even Townsend, in the back of the house, has loads of experience. You may remember him as the founder of the very popular The Rude Native in Oakville (which he sold in 2008). Now he's returned to the back of the house to do what he loves best, he says.

With experienced staff and a fresh new food concept that provides guests with numerous ways to fill themselves up (do you order a whole bunch of tapas and pintxos or take the safer choice and order an entrée?), Barra Fion Tapas & Barrel aims to become the reason for downtown dwellers to head uptown.

Even if Barra Fion's fresh take doesn't entice you, its lunch offer ““ a meal, plus a choice of mixed greens, patatas bravas or yucca fries and choice of 5oz house red or white, 16oz draft craft beer or soft drink for $12 ““ is sure to get the office crowd excited. Cue the hungry stomachs.