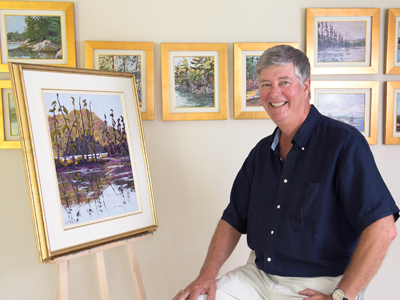 Gordon Mitchell has a spectacular view from his family's Muskoka cottage. Over the years, the Georgetown artist had requests from his siblings to paint their favourite scene, but he declined. Last summer while looking out his cottage window he painted, The Point, Clear Lake, Muskoka. “I thought now's the time,” says the landscape artist.

Mitchell garnered Red Door Gallery's 2015 Juried Show Jurors' Choice Award for The Point, Clear Lake, Muskoka, when he competed with 40 local artists from Halton, Brampton and Oakville in March. The beautiful lakefront painting was such a hit that it was sold before the show began. “As artists were taking in their submissions, they were clamoring over one another about who was going to buy it,” he says. “That's the highest acclaim that you can receive, when your peers praise your work to that extent.”

The artist, who works from his home studio and gallery, always had an appreciation for the arts. “When my father left me his oil paints, eventually I picked them up and started to play around,” he says. “All through my life whether it's photography, stained glass that I did way back in the '70s ““ it's always been a general interest of mine and eventually I evolved and settled into painting.”

Gordon has lived in the Georgetown area for the past 35 years, but growing up he frequently moved as his father was a mechanical engineer working for Johns Manville Mine. “My father's business took him across southern Ontario, so I attended 13 schools and universities.” Mitchell thinks back to one of the influences in his life. “There were always paintings of the Group of Seven hung in the halls, so during my idle hours I'd be looking at these.” His appreciation of nature comes from his love of the outdoors as he hikes, boats and travels to northern Ontario every summer.

It's important for Mitchell to establish a personal connection with his paintings. His stunning work captures the rugged, natural beauty of northern Ontario with familiar scenes of granite, pines, firs and open waters that many people recognize and are drawn to as well.

Mitchell's art caused quite a reaction from one woman attending his solo show, Timeless Landscapes in June at Red Door Gallery. The artist predominately paints scenes from Muskoka, Parry Sound and Lake Superior, but with his wife's urging he included a painting of a Quebec scene that inspired him while travelling. As the woman entered the gallery, Mitchell greeted her and her family and gave them a quick overview of his work, explaining that he only paints scenes if he's been to the location. As the woman, her husband and father began to browse around to see Mitchell's 60 paintings on display, he heard a gasp.

“She came running over, “˜You said you only paint locations you've been to,'” Mitchell explains. “I told her that's correct and she replied, “˜There's a painting here, Ottawa River, Dorion, Quebec.' Yes I was there last fall. My brother lives down the block and I thought it would be great to paint,” he says.

The woman's family also lived down the block from the exact scene Mitchell painted. As she told the artist her story, he could see her father getting emotional as the man had moved to Georgetown after his wife passed away. “Through this discussion, many memories came back that the father and daughter shared and she ended up buying the painting for him. It just so happened that it was Father's Day weekend and it certainly was a beautiful moment,” he says. “It's a real achievement when people make that connection.”